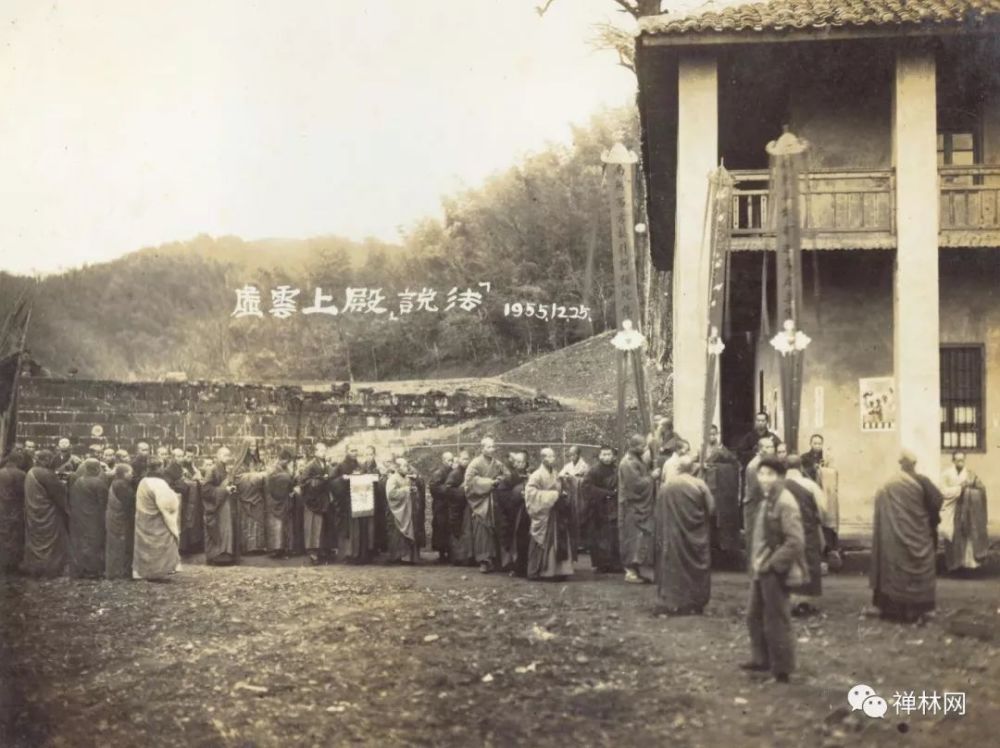 Everyday Life in the Zhenru Temple - Situated on Mount Yunju (1955) 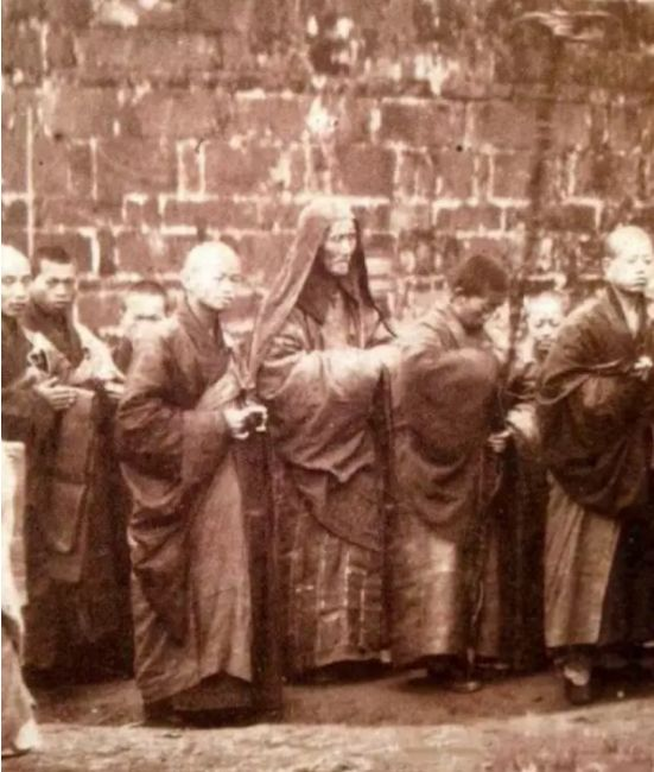 Master Xu Yun Queses with the Rest of the Monks...
To the immediate left of Master Xu Yun is a young Master 'Jinghui' (净慧) [1933-2013] - who is around 22-years-old. This picture is dated 25.12.1955 and taken at the Zhenru Temple on Mount Yunju. The monks are busy and the daily routine is regulated by the Vinaya Discipline and the Bodhisattva Vows.  Master Xu Yun is around 115-years-old. 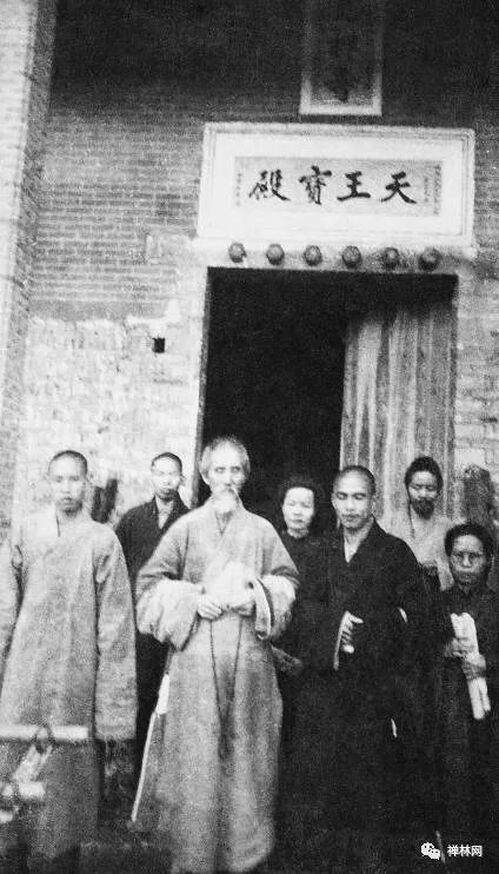 1947 was a Very Busy Year for Master Xu Yun!
Master Xu Yun is stood with Buddhist monastics and devout lay-practitioners outside of the 'Divine-Sky King' (天王 - Tian Wang) Shrine within the grounds of the Yunmen (云门) Temple situated in Guangdong province. Master Xu Yun started the Year at the Nanhua Temple, and then visited Hong Kong and Macao before returning to Yumen Temple to speed-up the renovations. 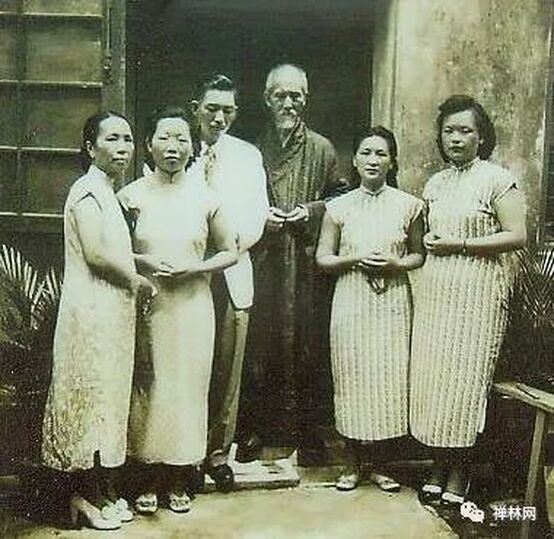 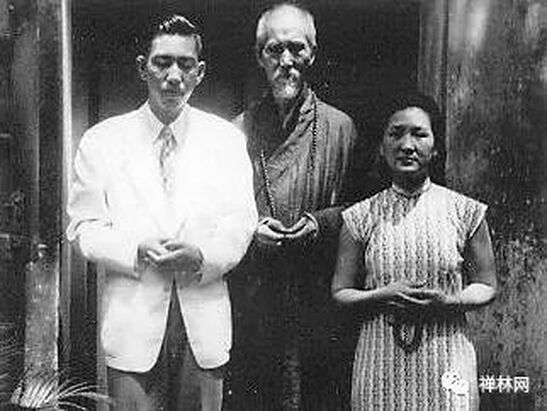 When Master Xu Yun was 'Head Monk' (住持 - Zhu Chi) of the 'Yongquan' (涌泉) Temple situated on Mount Gu in Fujian province, that is between 1929-1934, he travelled to Xiamen City and met with devout male and female lay-Buddhists. 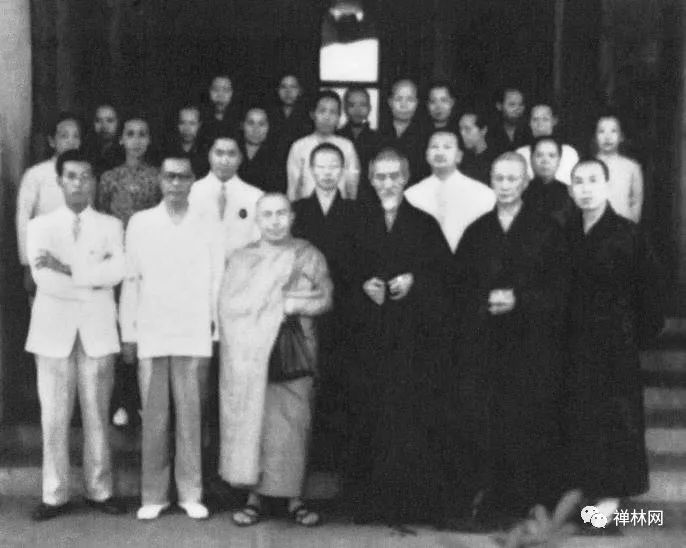 Master Xu Yun in Hing Kong (1935)
In 1935, Master Xu Yun was in his 96yh year of age. He travelled to Hong Kong at the invitation of the Donghua Group of Hospitals to perform a Purification Ritual (on Land and Water) for the spirits of the deceased. Master Xu Yun did this at the 'Donglian' (东莲) and the 'Jueyuan' (觉苑) Temples. He then participated in a group photograph of devout lay and monastic Buddhists which included the Venerable Dharma-Master 'Ci Hang' (慈航) who had just returned from Myanmar. Master Xu Yun then returned briefly to the 'Yongquan' Temple (on Mount Gu, Fujian province) where he resigned as 'Head Monk' before returning to the 'Nanhua' Temple in Guangdong province - and initiated repair work on the Hall of the Sixth Patriarch, etc. 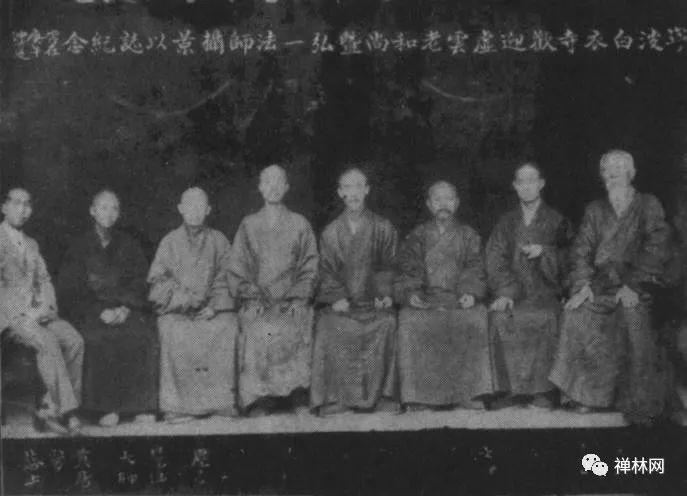 Precise Dating is Always an Issue with Old Chinese Photographs
The accompanying Chinese-language text states 'during the 19th year of the Republic of China (1930)' - whereas Master Xu Yun's autobiography states that these events transpired during Xu Yun's '89th year of age' during the year '1928-1929'. Both interpretations are probably correct depending upon interpretation and historical perspective. At this time in China's history the interface between lunar and solar calendars had not yet 'stabilised' to the more reliable position extant today. Master Xu Yun visited Ningbo (in Northeast Zhejiang province) and stayed at the 'Baiyi' (白衣) or 'White Clothing' Temple where he sat for this photograph accompanied by Master 'Hongyi' (弘一) to celebrate the Mis-Summer Solstice. Around this time, Master Xu Yun also vested the 'Ashoka' (阿育王 - A Yu Wang) Temple located in Ningbo and worshipped the Buddha's Relics held there. 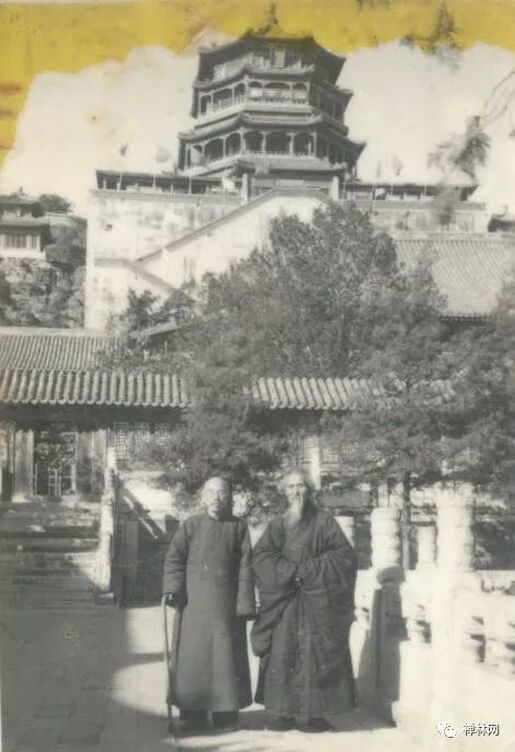 During the 10th month of 1952, Master Xu Yun attended the Asia-Pacific Buddhist Monastic Conference in Beijing - where he greeted the delegation of Bhikkhus representing Australia, Myanmar, Canada, Indonesia, Japan, Turkey, Vietnam, Thailand and Sri Lanka - led by the Venerable Dhammaratna - on behalf of the newly re-formed Chinese Buddhist Association (at the Guangji Temple situated in Beijing). When visiting the Summer Palace in Beijing at this time, Master Xu Yun agreed to be photographed with the devout layman 'Zhu Zhangsong' (朱长松). Master Xu Yun is unusually 'standing' despite his recent illness and weakness caused by his advanced age (he is 112-years-old). ​ 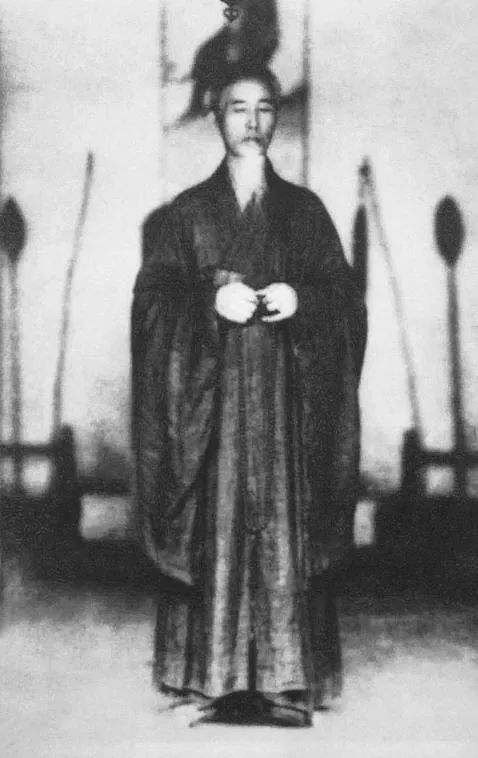 Master Xu Yun Stood 'Contemplating' in the Main Hall of a Temple...
In 1897, Master Xu Yun vested the  'Ashoka' (阿育王 - A Yu Wang) Temple located in Ningbo (Zhejiang province(, where Master Xu Yun went to worship the Buddha's Relics held there. At this time, Master Xu Yun was in his 58th year of life and expressed a very devout and pious attitude during this visit, and to fulfil a vow of 'respect' and 'iteration' to his mother who died just after giving birth to him. Master Xu Yun performed around three-thousand prostrations per night (instead of sleeping), Eventually, whilst sat in Ch'an meditation Master Xu Yun saw a golden dragon descend from the divine-sky! He climbed on its back and it carried him to up into the sky and to a place where the mountains, trees, flowers and rivers were the most beautiful he had ever seen! In a room of a resplendent palace he saw his mother and called-out to her to get on the back of this dragon so that it could take her to the Western Paradise to see Amitabha! This she did, and was transported to her salvation! When he emerged from this vision he could recall it clearly as it was the only time he ever saw his mother!

Martial arts practice is premised upon the ancient Chinese medical ideal that the various 'postures' that comprise martial arts 'Forms' (that is, a collection of defensive and offensive movements weaved together in a fixed pattern of practice and transmitted from one generation to the next), are externally 'linked' to the stimulation of the inner organs. This correlates to the modern medical idea that 'regular exercise' is conducive to mind and body well-being and general health. This early Chinese science certainly pre-dates Buddhism but was integrated into Buddhism more or less at its arrival from India around the 1st century CE (perhaps earlier). This Chinese practice of external martial arts movement only benefits the health of the inner organs of the body when the mind is permanently purified of greed, hatred and delusion, as required by the teachings of Buddhism. Master Xu Yun is stood manifestoing the the 'mirror samadhi' as described in the Surangama Sutra. This mind-set embraces all things without exception - integrating 'form' and 'void' in a perfect harmony. If this dating and location is correct - it is the time and place that Master Xu Yun burnt-off his finger our of respect for his mother's sacrifice. In this picture, the finger is already missing and could have been burnt-off in the days just prior to photographing. However, it could also be a 'commemorative' photograph taken of Master Xu Yun's visit to the Ashoka Temple during 1930 (as his finger shows no signs of recent injury or healing) and could have been affixed to an earlier story involving the same place! 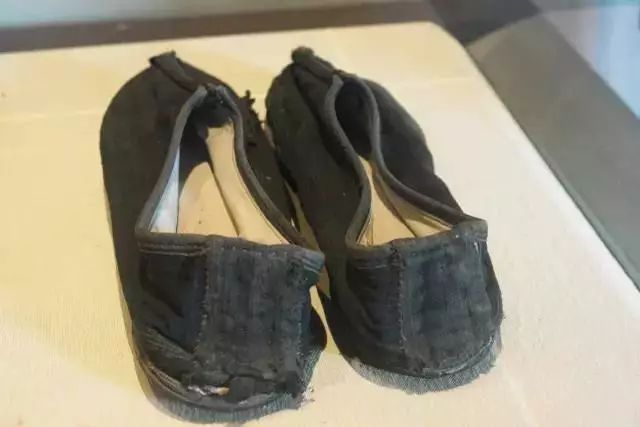 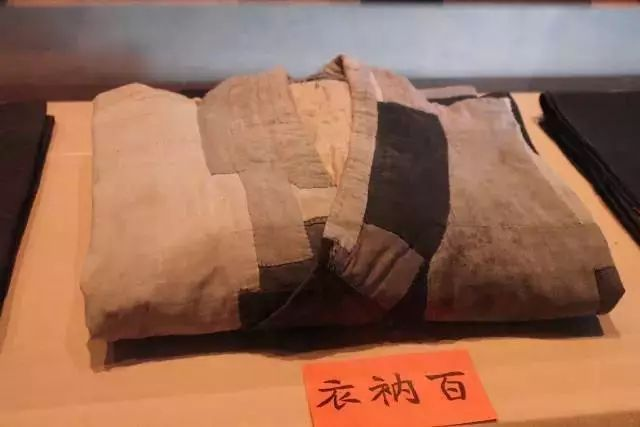 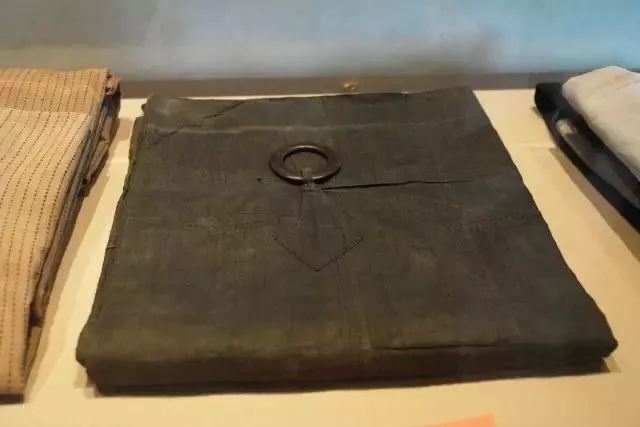 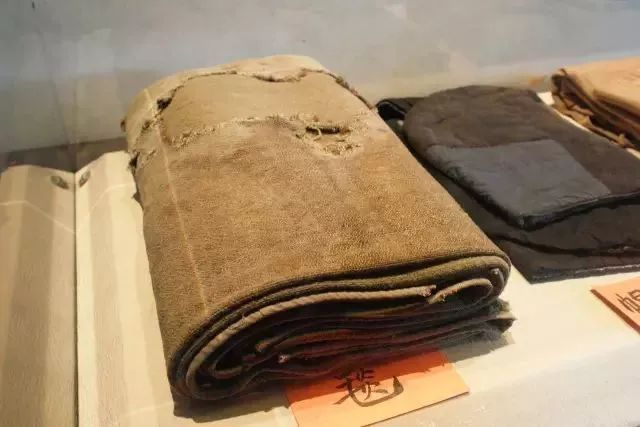 Master Xu Yun's 'Threadbare' Blanket.
These, and other objects pertaining to the life of Master Xu Yun, are held in the 'Xu Yun Memorial Hall' (previously featured), which was formerly Master Xu Yun's old 'Cow-Shed' situated within the grounds of the Zhenru Ch'an Temple on Mount Yunju, Jiangxi province - and are treated as spiritually powerful objects of 'veneration'!
ICBI LIBRARY NUMBER: 0099 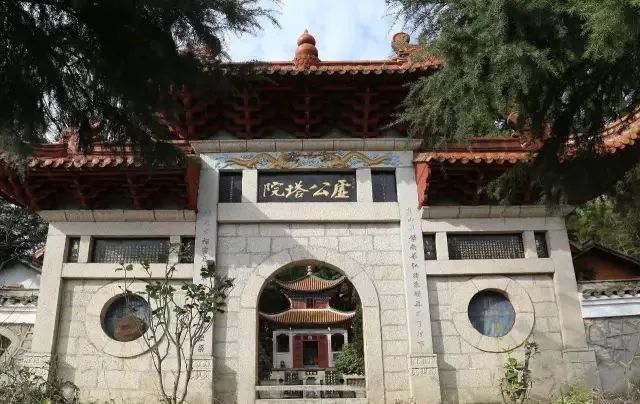 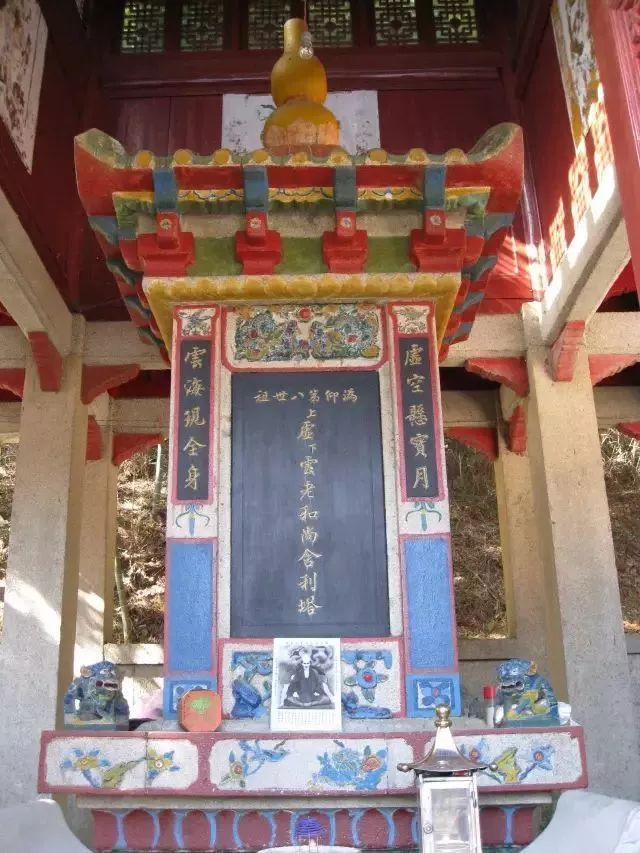 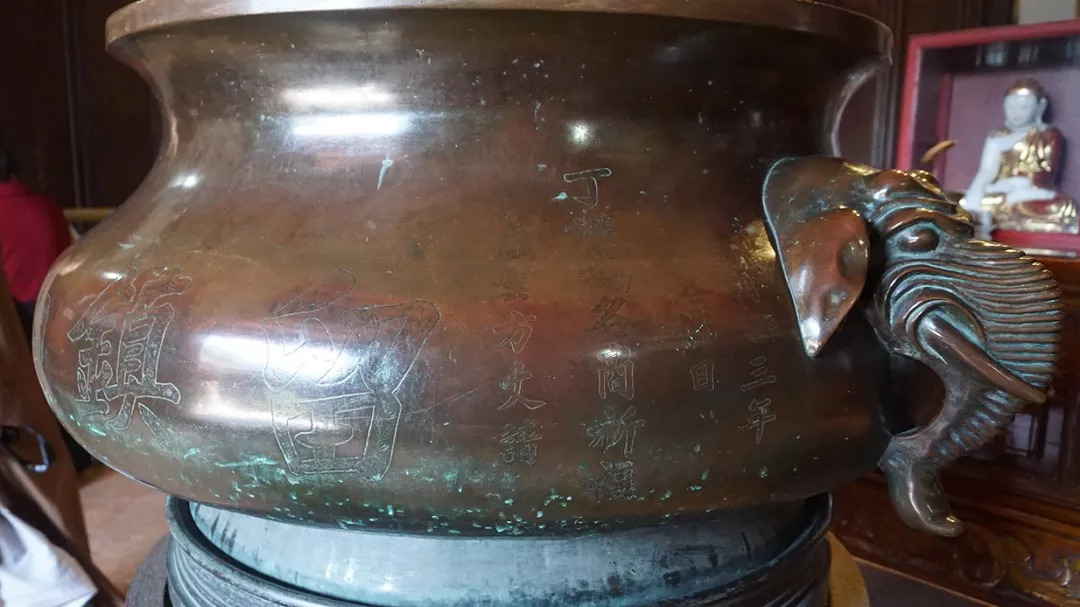 The copper incense burner purchased by Master Xu Yun when he was the 'Head Monk' of 'Yongquan' (涌泉) Temple Mount Gu (鼓山 - Gu Shan) situated in Fujian province (between 1929-1934), ​