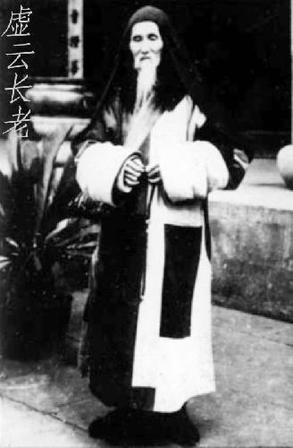 Master Xu Yun wears the distinctive black and white patchwork robe, a robe that is made from left-over pieces of cloth.  In ancient India ascetics often clothed their body in rags found on rubbish heaps, or retrieved from rotting corpses in cemeteries.  The patchwork robe is a sign of great humility and far cry from the designer robes prevalent in today’s society.  Here Master Xu Yun wears an extra piece of cloth that serves as a hood that covers his head and shoulders – in other pictures featuring Xu Yun in such a robe, this extra garment is absent.  This picture was taken in 1956 outside the main hall Zhen Ru Monastery on Mount Yun Ju and Master Xu Yun is in his 117th year of life.  In this year he finished important rebuilding tasks at the monastery, which included the repair of the main hall, (which he is stood in front of in this picture), the Tower of Humility, the Shrine to the Four Deva Kings (the Protectors of the Monastery), the Tower of Humility, the Bell Tower, shrine halls and dormitories, etc.  In three years Master Xu Yun had successfully directed the rebuilding of Zhen Ru – in all this time he never requested funds once and yet many people felt compelled to contribute to the cause nevertheless, such was the purity of Xu Yun’s mind.  The Chinese writing running down the upper left-hand side of this photograph reads ‘Xu Yun the Elder’ (虚云长老 – Xu Yun Zhang Lao).  The basic facts regarding this picture are confirmed in the Chinese text that accompanies it: 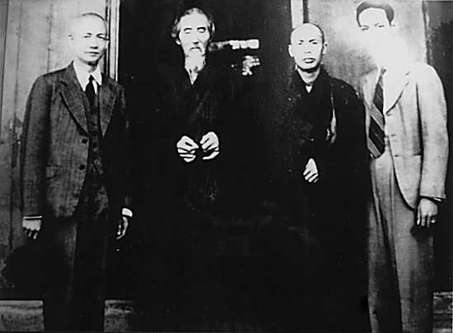 From left to right, the people featured in this photograph are; Mr Lin Song An, Master Xu Yun, Master Zhi Cheng, and Mr Lin Bang Xiong.  This picture was taken in 1946 at the Kai Yuan Temple situated in Chaozhou, eastern Guangdong province.  In 1946 Master Xu Yun was in the 107th year of his life.  The war against the Japanese had come to an end and Master Xu Yun was able to move about with greater freedom in South China.  After expounding the Buddhadharma a great number of disciples took the precepts. In the winter, Xu Yun’s senior disciple – Guan Ben – passed away.  To read an English translation of a rare Chinese newspaper article relating to the people and circumstances surrounding this photograph, please access the following link:

A Treasured Photograph From 66 Years Ago By Lin Bang Hong 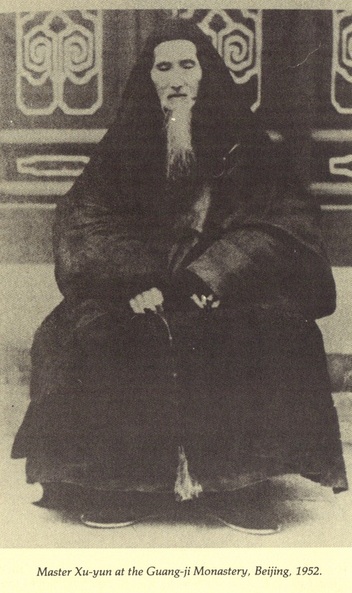 One of a number of photographs taken in late 1952 when Master Xu Yun was in his 113th year of life.  On the 28th day of the 7th lunar month he (and his attendants) boarded a train for Beijing. Initially he travelled to the Guang Hua Monastery but so many hundreds of people came to pay their respect that the monastery proved too small.  He then moved to the Guang Ji Monastery that could better handle the crowds that he attracted.  At this temple over a hundred delegates representing Buddhism from all over China arrived to take part in a conference.  It was decided to re-establish the Chinese Buddhism Association and Master Xu Yun was offered the Presidency which he declined on the grounds of old age and ill health.  Master Yuan Ying was then elected President with the Tibetan Sherab Gyatso and Zhao Bo Zhu as Vice Presidents.  Master Xu Yun looks magnificent in his full robes as he sits with his mala – he is detached from the turmoil that surrounds him. 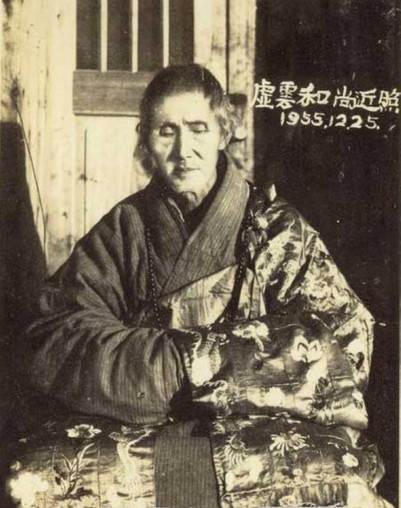 The date written on this photograph is the 25th of December, 1955.  Master Xu Yun is living on Mount Yun Ju (at the Zhen Ru Monastery) working on its repair.  Just prior to this in the autumn, several dozen monks came to Yun Ju to request the transmission of precepts and ordination from Xu Yun.  The Master thought it unwise to proceed without government permission, and contacted the authorities.  When news got out that Xu Yun was going to transmit the precepts during the 10th lunar month, around 500 monks gathered on Yun Ju.  This was far too many and so the Master expounded the 10 prohibitions, the Vinaya rules, and the 3 cumulative commandments before asking 400 of the monks to return to their home temples.  He instructed these monks to follow the instructions found in the Brahma Net Sutra on a specific day, and make use of the expedient of self-ordination.  In this way Master Xu Yun openly ordained 100 monks on Yun Ju, whilst simultaneously ordaining 400 other monks at a distance and in secret.  Master Xu Yun was in his 116th year of life.

Additional Information: 'Here he is wearing the purple Kesa he gave to my Master. Master
Sheng Yi wore it when ordaining me. It was given him by Prince Soo I think.' Eric Johns Email 7.11.13. 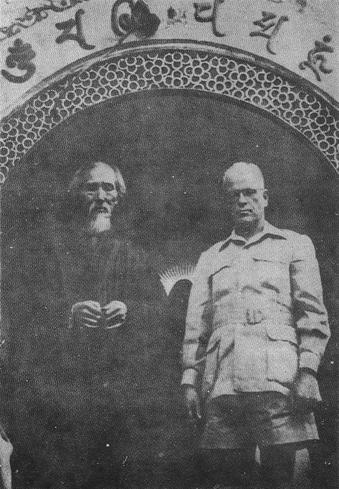 This translates into English as:

‘The old Master Xu Yun pictured with the Head of US Media – called Newton.’

The inscription above the arch behind the two men appears to be in Sanskrit and reads; ‘ॐ मणिपद्मे हूं’ – which is, of course, the famous mantra ‘Om Mani Padme Hum’ (Chin: ‘唵嘛呢叭咪吽’).  Although there is no date or place name is given for this picture, the same archway is evident in (ICBI Library) picture - Number 0051 – which identifies the location as being the Temple of the Six Banyans, situated in Guangzhou, Guangdong province.  Master Xu Yun visited this temple in 1946/47 whilst in his 107th year of life. 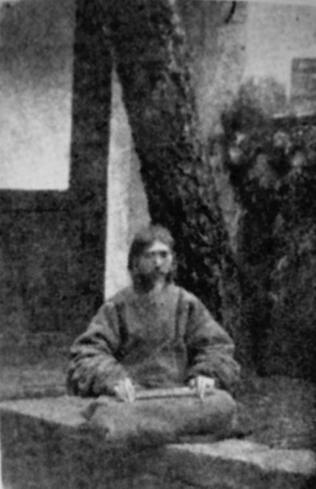 Master Xu Yun sits in meditation under a tree believed to over a thousand years old.  The Master is sat infront of the Sagely Arrow Hall (圣箭堂– Sheng Jian Tang), situated in the Yongquan Temple on Mount Gu, Fujian province.  The year is 1932/33 and the Master is in his 93rd year of life.  In 1928/29, the former Abbot of Mount Gu – Da Gong – passed away and Xu Yun was asked to take his place – an invitation Xu Yun formally accepted in 1929/30.  In 1932/33 an unusual old man came to Xu Yun, knelt on the ground and requested instruction in the Vinaya – or rules of discipline.  This man’s name was Yang and he said he was from Nan-tai.  The monk called Miao-zong monk (who also came from Nan-tai) said to Xu Yun that he had never heard of him.  After receiving the Bodhisattva Precepts and a certificate of discipleship; the old man vanished without a trace.  Later, when Miao-zong had returned to Nan-tai, he found at the Templeof the Dragon King, a statue that looked just like this old man.  The statue held in its hand a certificate of discipleship.  After this it became common knowledge that the Dragon King had received Precept transmission from Master Xu Yun.  The following accompanying Chinese text confirms the basic details of this photograph: 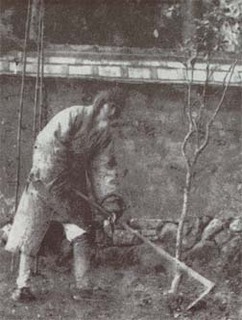 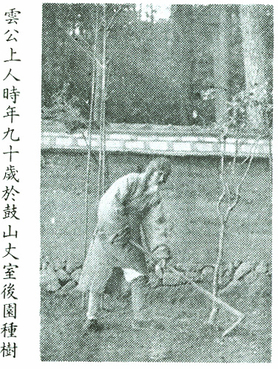 It has been a long tradition in China that Buddhist monks and nuns are not allowed to beg for their daily food from the laity – as is the case in many other Buddhist traditions.  Indeed, within the Ch’an monastic tradition the idea that all states of being are potentially an equal manifestation of the empty Mind Ground, has been applied to the cultivation of land for farming purposes.  Using an agricultural implement to till the land is treated with the same attitude as if one were sitting in the meditation hall – no difference should be found anywhere.  This in the attainment and practice of‘non-abiding mind’ and is in accordance with the 6th Patriarch’s teachings as conveyed in the Altar Sutra. This picture depicts Master Xu Yun in his 90th year of life in the year 1929/30.  He is preparing the ground for the planting of tree seeds in the garden just behind the Abbot’s Room on Mount Gu, Fujian province.  Having just accepted the post of Abbot, Master Xu Yun is setting an example to the other monks.  Although 90 years of age he - is still able to cultivate the land and no work is beneath him. 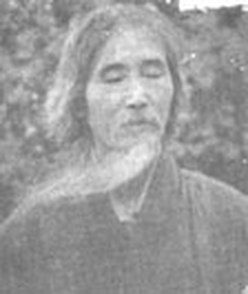 In the year 1931/32 Master Xu Yun was in his 92nd year of life.  At this time on Mount Gu, the Master continued his duties as Abbot.  He expounded the sutras and transmitted the precepts, and founded a Vinaya school.  He also rebuilt the temples of Bing Qu, Xi Lin, and Yun Wo.  The Chinese text accompanying photographs from Mount Gu dating to this period, invariably refer to the Master as ‘云公上人 – Yun Gong Sheng Ren), or ‘Yun the Respected Venerable’. 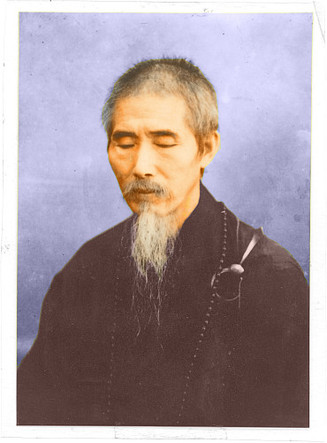 This photograph hangs today as a portrait at the Zhen Ru Monastery situated on Mount Yun Ju, Jiangxi province.  This picture is not included in the 1988 Element Books edition of Charles Luk’s English translation of the Chinese biography entitled ‘Empty Cloud The Autobiography of a Chinese Zen Master Xu Yun’ (edited by Richard Hunn), but it does appear as one of the many pictures contained in Cen Xue Lu’s original Chinese language edition of the biography – Xu Yun he Shang Nian Pu) 虛雲和尚年譜).  The scholar Cen Xue Lu records this photograph as being taken during Master Xu Yun’s 115th year of life (1954/55) on Mount Yun Ju, during the 30th day of the 7th lunar month.  This was a significant month and the biography records that over 20 dormitories, a brick-kiln, latrines and a rice-pounding room were rebuilt. At this time, Abbot Ben Huan, (of Nan Hua Monastery), Bhiksuni Guan Ding (of Tai Bing Lotus hall), and four others came to pay respect to the Master.  There was a large, cracked bell lying on the ground, and Master Xu Yun explained that it is called the ‘self-ringing bell’, and that it had become cracked when the invading Japanese burnt down the bell-tower.  In the past, the bell would ring on its own whenever an enlightened master arrived at the monastery.  He added that the crack in the bell would mend by itself.  When the bell was examined, it was discovered that the indeed the crack had begun to repair itself.  Despite ample living space available in the monastery, the Master preferred to stay in an old cowshed. 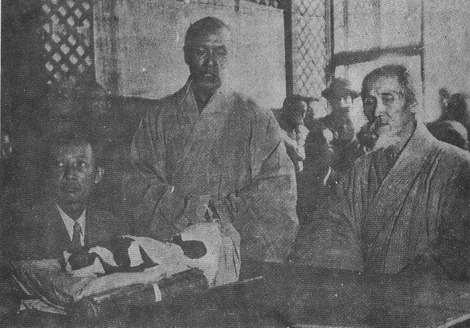 In the year 1946/47 World War II finally came to an end in China with the final defeat of the imperial Japanese forces.  After this the Chinese authorities re-occupied all their former locations and established law and order.  The Chinese government ordered all the monasteries to hold ceremonies and chant sutras to comfort the spirits of those who had died in the war.  Master Xu Yun was invited to the Six Banyans Temple situated in Guangzhou, Guangdong province, to hold a similar ritual.  Whilst Master Xu Yun was chanting mantra and reading sutras, the peach trees in the temple suddenly blossomed.  Over 100,000 people came to see this event – as the trees had produced flowers out of season.  This was put down to the power of the Master’s spiritual presence.  In 1946/47 Master Xu Yun was in his 107th year of age.  This photograph of his visit to the Six Banyans Temple shows him with Master Kuan Jian.