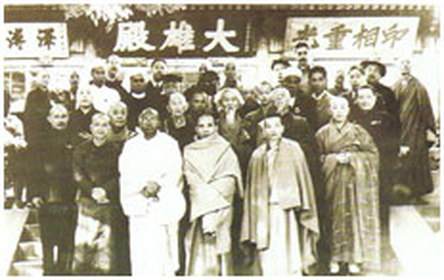 On the 10th lunar month of 1952, Master Xu Yun, who was in his 113th year of his life, (and staying at Guang Ji Monastery, Beijing), met a delegation of Theravada Buddhist monks visiting China from Sri Lanka.  He met them on behalf of the recently re-established Chinese Buddhist Association. The Sri Lankan delegation was led by Bhikkhu Dhammaratna, and presented a relic of the Buddha, a Buddhist Pali Sutta written on pattra (palm-leaves), and a Bo-tree sapling.  Over two thousand devotees attended the reception.  It is interesting to note the mutual respect each school of Buddhism offers toward the other.  There is no conflict between the Mahayana and the Theravada. 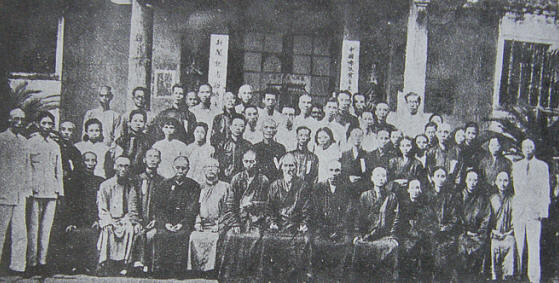 Master Xu Yun is in his 107th year of his life as he is photographed with fellow monastics and lay people of the local Buddhist association gather around the main entrance to the Six Banyans Temple situated in Guangzhou, Guangdong province.  The year is 1946/47 and Master Xu Yun has just officiated over a chanting and sutra reading ritual to assist the spirits of those killed during the awful events of World War II.  The central government had ordered all the monasteries and temples in the land to perform similar rituals and ceremonies in honour of the dead.  Due to the unseasonal flowering of plants at the temple, around 100,000 people came to see this unusual event – an event believed to be associated with Xu Yun’s enlightened presence. 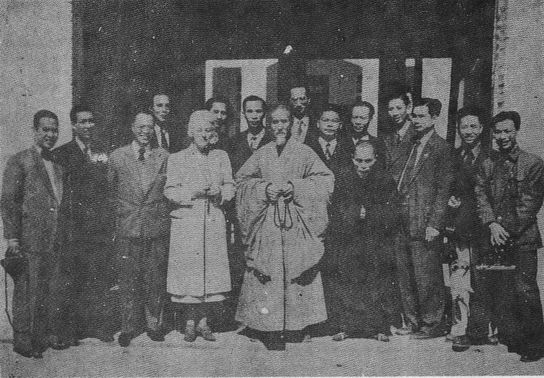 This interesting picture was taken in 1946/47 when Master Xu Yun was in his 109th year of life.  The Master had travelled to Guangzhou(the place of this photograph), to open Zhi-de’s Buddhist Hospital.  The original Chinese language caption explains that the men gathered around are news reporters, and that the Western woman is Ananda Jennings (before she ordained at the Nan Hua Temple). The reporters appear to have been present to cover the opening of the hospital for the local press.  The caption further explains that Xu Yun expounded the Dharma at the hospital. 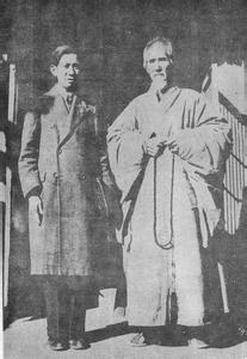 Master Xu Yun is pictured here with the Guangdong Provincial Senate member – the lay Buddhist Wu Pei Lin. Although undated in the Chinese text, it is reasonable to assume that this picture was taken in 1946/47 during Xu Yun’s opening of a Buddhist hospital in Guangzhou.  Master Xu Yun is wearing the same robe and is carrying the same set of beads as recorded in his photograph with Ananda Jennings in Guangzhou.  Master Xu Yun at this time was in his 109th year of life. 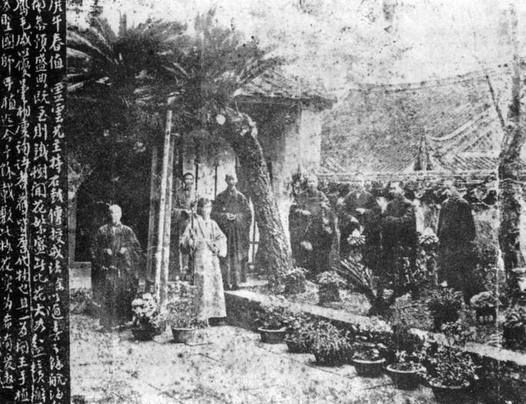 Master Xu Yun returned from Shanghai to Mount Gu in early 1930 – in his 90th year of life.  In the spring of 1930, he held an ordination ceremony at the Yong Quan Temple and transmitted the precepts to those entering the monastic life.  Such was the power of this extraordinary event that two ancient palm trees blossomed unexpectedly.   The Chinese text says that as a consequence of this rare occurrence, many people gathered and exclaimed that this event signified great hope. Xu Yun’s biography states that these two feathery palm trees were planted around 1000 years ago during the Tang Dynasty.  One was planted by the Prince of the Min State, (now Fujian province), and the other by Abbot Sheng Jian. The rare flowering of these trees was recorded by Master Wen Shi on a stone tablet at the temple. 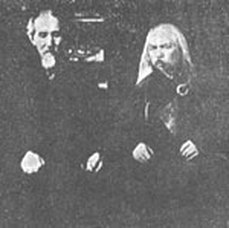 Master Xu Yun is pictured here with Master Hui Guang at the Nan Hua Temple in Guangdong province.  The year is 1947/48 and is described in the accompanying Chinese text as being the 36th year of the Republic of China, the founding of which is usually recorded as the 1stof January, 1912.  Prior to 1949, dates in China were always recorded in accordance with the length of time a dynasty had been in power.  At this time, (the second lunar month), Xu Yun was in his 108th year of life, and was holding an ordination ceremony for 500 new monks when Master Hui Guang arrived.  This picture (preserved in Hui Guang’s biography) was taken to record the meeting. 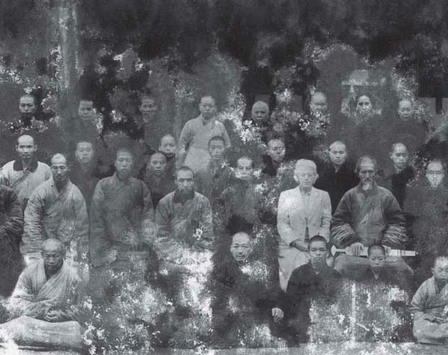 Master Xu Yun is sat with the American Buddhist – Ananda Jennings – and the monks of Nan Hua Temple, situated in Guangdong province.  Previously to her visit to China, Ananda Jennings had travelled to India to learn the Dharma, whilst there she spent an extended amount of time living in voluntary seclusion.  After meeting Xu Yun in Guangzhou, they travelled together to the Nan Hua Temple, where Master Xu Yun transmitted the refuge formula to Jennings and gave her the Dharma-name ‘Kuan Hung’ (Great Vastness).  After this a Ch’an Week meditation retreat was held to mark the occasion.  The year is 1948/49 and Master Xu Yun is in his 109th year of life.  This is a rare example of Xu Yun holding the ‘Fragrant Board,’ or ‘Discipline Stick’ (香板 - Xiang Ban).  This blunt, wooden device – in the shape of an ancient sword - is used to expertly strike important energy points on the upper back and shoulders, so that a drowsy practitioner is revived during long hours of meditation practice. 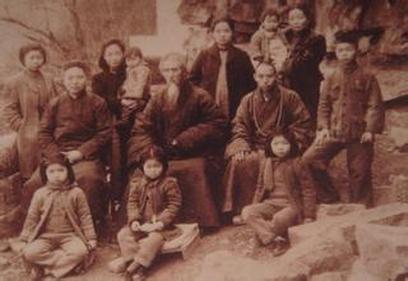 In Xu Yun’s biography the following passage is found describing events that happened in 1942/43:3:

‘I left Nan-hua on the sixth of the eleventh month and when I arrived at the sacred mountain of Heng-shan in Hunan Province, I offered incense at the monastery there and met Upasaka Xu Guo-zhu who had been sent by Marshall Li Ji-shen to invite me to Guilin.  On arrival, I stayed at Mount Yue-ya where monks, nuns, male and female lay devotees came and asked to be disciples of mine.’

The Chinese text accompanying this photograph states that the date is the 14th day of the 11th lunar month, 1942, and that Xu Yun is on Mount Yue-ya in Guilin (Guangxi province), and is with disciples  The text also states that the monk sitting to his right is Dharma Master Dao An.  However, Xu Yun appears to be sat with a single family whose constituents are typical of that of an official, or someone of important or high social rank (perhaps Marshall Li Ji-shen).  The head of the household (i.e. the husband/father) is sat to the left of Xu Yun. Four women – probably the wives – are stood behind Xu Yun, with two of the wives holding young children.  On the right of the picture is stood the son (around 10 – 12 years old), and sat at the front of the picture are 3 young girls (probably around 8 years old).  In old China it was not uncommon for men of social standing to have up to four wives at the same time.  Xu Yun was in his 103rd year of life when this picture was taken. 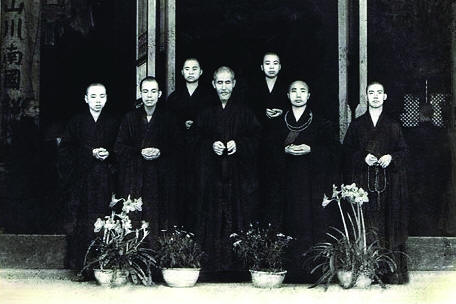 Master Xu Yun spent around 6 years repairing the temple of the Sixth Patriarch (Hui Neng) – the Nan Hua Temple (in Guangdong province), between his first arrival in 1934 and its completion in 1940.  He then returned to Nan Hua a number of times, receiving dignitaries and holding Ch’an Week retreats until his permanent move to Mount Yunmen in 1950/51.  Although this picture is undated, Xu Yun looks very similar in appearance to a picture taken of him in Hong Kong and dated to 1935/36, when he was in his 96th year of life.  There are a number of group pictures featuring Xu Yun’s senior disciples taken at various times in his life (disciples such as Miao Yun and Guan Ben). Xu Yun’s biography records that on the 17th day of the 11 month of 1934/35, during the transmission of the Bodhisattva Rules (at the Nan Hua Temple), a tiger came in as to receive the precepts.  Although people were scared, Xu Yun spoke the Refuge Formula and the tiger became calm and went away.  The accompanying Chinese text simply reads ‘Master Xu Yun at NanHua Temple, photographed with many monks (Sangha).’ 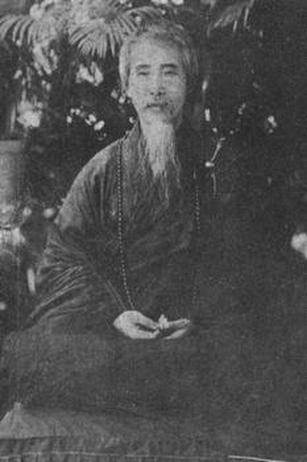 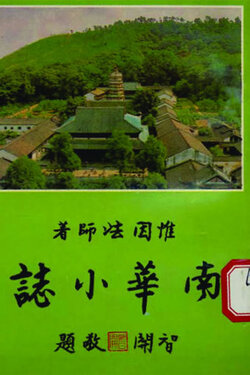 This photograph of Master Xu Yun appears to show him meditating with his eyes open.  This picture was published in the 2nd lunar month of 1937 – Xu Yun’s 97th year of life – during the period of his life when he was rebuilding the Nan Hua Temple in Guangdong province.  Indeed, this picture is described as appearing in the book entitled ‘Small record of Nan Hua’, in the chapter ‘Sui (Dynasty) Purity Record’ – a text dealing with pure (chaste) behaviour, and vegetarianism.