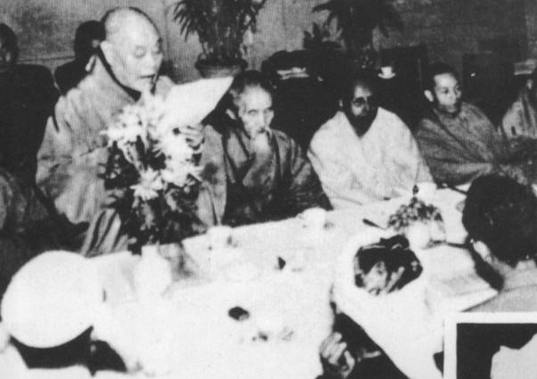 The date is the 15th day of the 10th lunar month (1952/53), and Masters Xu Yun and Yuan Ying are in Beijing attending the ‘Asia Pacific Regional Peace Conference.'  Master Xu Yun is in his 113th year of life.  It was decided that the Chinese Buddhist Association be re-established, but Xu Yun declined the offer of the Presidency due to ill health and old age.  Instead, Master Yuan Ying was elected President.  After this, a Prayer Meeting for World Peace was called by the Buddhists of Shanghai.  Xu Yun arrived in Shanghai on the 25th, and the meeting began the following day (the 26th day of the 10thlunar month).  This very special meeting lasted 7 weeks during which time many donations were received (and distributed). The 1988 Element Books edition of Charles Luk’s English translation of Xu Yun’s biography Empty Cloud (edited by Richard Hunn), goes on to say (page 147) that on the 17th day of December, 1952, the Master gave a sermon to the meeting regarding the integrated nature of the many different paths to enlightenment.  Although all different in manifestation, all true paths share the same root.  On page 149, Xu Yun is recorded as stating:

'All methods are good for practice and if you find one which suits you, practice it; but you should never praise one method and vilify another, thereby giving rise to discrimination.  The most important thing is sila (discipline) which should be strictly observed.  Nowadays there are corrupt monks who not only disregard the rules of discipline, but who say that to observe them is also a form of clinging; such an irresponsible statement is harmful and dangerous to beginners.’ 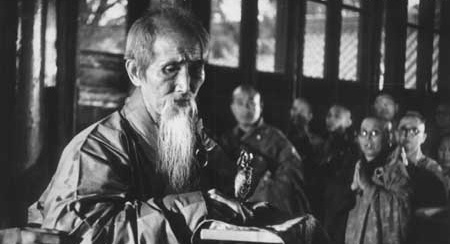 In 1953/54 – during his 114th year of life – Master Xu Yun travelled to the Guang Ji Temple in Beijing to attend the ‘Calming the World Dharma Conference’.  This gathering should not be confused with the earlier conference of 1952/53 entitled the ‘Asia Pacific Regional Peace Conference’, both of which were attended by Xu Yun.  In the earlier conference the Chinese Buddhist Association was re-established, whilst the latter meeting served as its inaugural gathering.  At the ‘Calming the World Dharma Conference’, degenerate monks attempted to pass a resolution to abolish the need for monks and nuns to follow the rules of the vinaya, but Master Xu Yun, through his influence, prevented this idea from being accepted by the other delegates, and it was rejected. 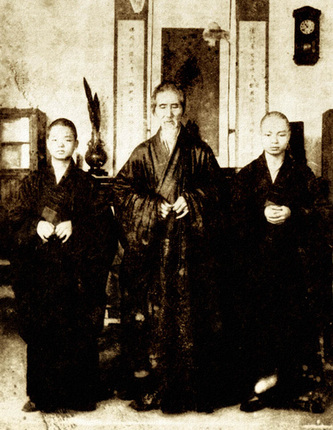 Master Xu Yun arrived at the Zhen Ru Monastery, (situated on Mount Yunju, Jiangxi province), in the year (1953/54).  He was in his 114th year of life.  The Zhen Ru Monastery was the last Buddhist site that he repaired during his long life and it was the place of his parinirvana and cremation in 1959 – his 120th year.  During his six year stay on Mount Yunju many photographs were taken of him, sometimes on his own, or, as with this example, in a group.  The accompanying Chinese text simply reads: ‘Master Xu Yun at Mount Yunju.’

Additional Information: 'He was on Lu Shan at Da Lin Si when he was invited to Yun Ju Shan, Zhen Ru Si.  The Great Wood monastery 大林寺, with it's corrugated tin roof is now under the man made lake on Lu shan.'  Eric Johns Email 7.11.13 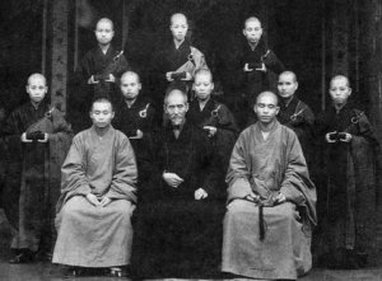 A group photograph of Master Xu Yun and 10 monks (Bhikshu) who are disciples.  Although undated, Xu Yun wears the black robe, and has a similar hair and beard style to a photograph taken at the Nan Hua Temple, (Guangdong province), during the 1930’s and 1940’s.  As he did not arrive at Nan Hua until 1934, (his 95th year), this photograph certainly dates to after this time.  The accompanying Chinese text does mention 10 disciples by name – but it is unlikely these 10 disciples (all of whom received Dharma-transmission from Xu Yun) are actually in this photograph; Ju Xing, Guan Ben, Ling Yuan, Ben Huan, Fo Yuan, Jing Hui, Sheng Yi, Xuan Hua, Chuan Yin, and Yi Cheng. All the monks in this picture appear to be young men and even though Master Guan Ben became a disciple of Xu Yun in 1932/33, (and passed away in 1946/47), it is recorded in Xu Yun’s biography that he was a scholar during the Qing Dynasty, suggesting that he was not young when he became a monk.  Furthermore, the fact that Master Fo Yuan did not become a disciple of Xu Yun until 1952 (at Yunmen), means for example, that Guan Ben and Fo Yuan could not appear in a photograph together with Xu Yun, etc. 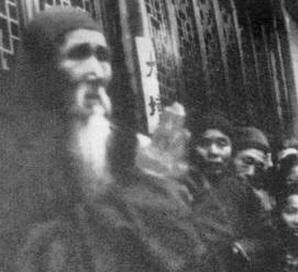 Master Xu Yun arrives at the Guang Ji Temple in Beijing to attend what the Chinese text describes as a ‘Calming the World Dharma Conference’.  The year is 1953/54 and Master Xu Yun is in his 114th year of life. At this conference the Chinese Buddhist Association held its inaugural meeting.  This meeting should not be confused with the earlier ‘Asia Pacific Regional Peace Conference’ which occurred earlier in 1952/53. This photograph demonstrates the extraordinary spiritual power of Xu Yun’s presence. 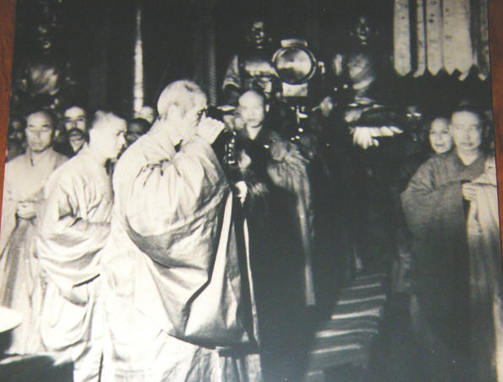 Master Xu Yun wearing his ceremonial robes as he walks into the ‘Calming the World Dharma Conference’ held at the Guang Ji Temple in Beijing in 1953/54 - with a natural aura of spiritual authority and physical strength about him.  He is in his 114th year of life, and as he passes through the crowds that have gathered, he appears to be shielding his eyes with his right hand from the flash of a photographer’s camera. In 1952/53 Xu Yun attended what Chinese texts refer to as the ‘Asia Pacific Regional Peace Conference’ whilst the accompanying text to this picture refers to this (later) gathering as the ‘Calming the World Dharma Conference’.  This refers to another gathering at the Guang Ji Temple in Beijing, which the English translation of Xu Yun’s biography (Empty Cloud) states occurred in the 4th month of 1953/54.  This was the inaugural meeting of the recently re-established Chinese Buddhist Association and the biography states that degenerate monks attempted to abolish the vinaya rules – a move which Xu Yun blocked, thus ensuring the survival of the Chinese Buddhist Sangha.

Additional Information: 'Here it looks to me that he just finished prostrations and is making the usual finishing triangular mudra (to overcome greed hate & delusion).'  Erci Johns Email 7.11.13 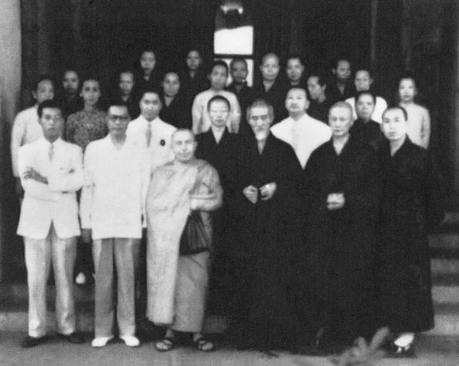 In 1935/36 Master Xu Yun was in his 96th year of life.  Although still holding the Abbotship of Mount Gu, he had travelled to the Nan Hua Temple to begin its restoration.  Xu Yun’s biography states that after the transmission of the precepts, he was invited to the Donghua group of hospitals in the British colony of Hong Kong to perform a ritual for the welfare of the dead on the earth and in the water.  An altar was set-up for this purpose at the Dong Lian and Jue Yuan Temples.  Xu Yun is pictured here with local monastics and hospital staff.  Interestingly, the monk to the left of Xu Yun – and dressed in the Theravada style – is recorded as Dharma Master Ci Hang (慈航法师).  The accompanying Chinese text suggests that the Venerable Ci Hang has just returned home to China from Myanmar (Burma), and is actually Chinese by birth. 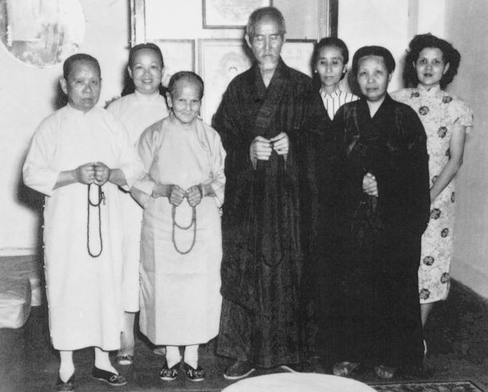 Master Xu Yun is wearing the black robe (together with the hair and beard style), seen in many photographs taken at the Nan Hua Temple, (situated in Guangdong province).  He arrived at Nan Hua in 1934, his 95th year of life, and spent over a decade repairing the temple and holding Ch’an Week meditation retreats. He took the American Buddhist Ananda Jennings to the Nan Hua Temple in 1948/49 where she received the precepts.  In this time period Xu Yun also visited Hong Kong twice, once in 1934/35 and again in 1947/48, another possible location for this photograph.  The accompanying Chinese text simply states that Master Xu Yun has been photographed together with lay-Buddhists – perhaps these lay-Buddhists (all of whom appear to be women), have received the precepts from Xu Yun and participated in a Ch’an retreat. 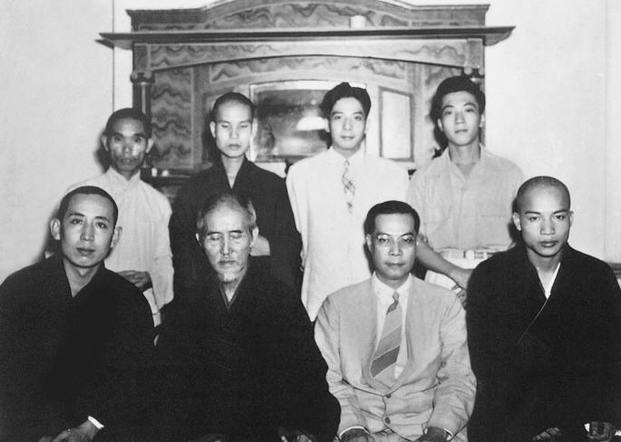 Whilst Master Xu Yun’s activity centred on the Nan Hua Temple from 1934 until 1950, he visited Hong Kong twice – both times at the request of the Donghua group of hospitals.  According to Xu Yun’s biography the 1934 visit was to perform a ritual for the welfare of spirits on earth and in water, and the 1947 visit it was to hold a ceremony for the welfare of the British colony which had been occupied by imperial Japanese troops during WWII.  This is a rare Xu Yun photograph as it has a date, a location, and a list of names.  The accompanying Chinese text says that to the front left (of Xu Yun) is Dharma Master Jue Guang (觉光法师), whilst to the front right is the lay-Buddhist Hu Wen Hu (胡文虎), or perhaps the President of the Hong Kong Buddhist Association – the lay-Buddhist Wang Xue Ren (王学仁). 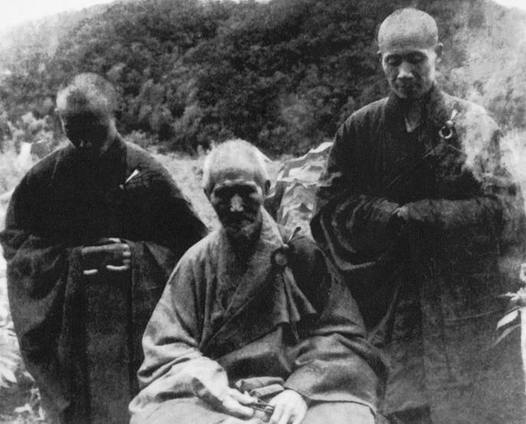 Master Xu Yun sat meditating and using mala (Buddha-beads) with two monk-attendants at the Zhen Ru Monastery situated on Mount Yunjuin Jiangxi province.  According to the English translation (Empty Cloud) of Xu Yun’s biography, he arrived at Yunju in around the 9th month of 1953/54 after travelling around the north of China.  He was invited to Yunju to initiate a re-building project, and he stayed there until his passing in late 1959.  During these 6 years many photographs were taken of Xu Yun.  In many pictures such as this, the monks bow their heads out of respect for the old master.  The accompanying Chinese text simply states that this is a picture of Xu Yun taken on the Yunju Mountain, at the Zhen Ru Monastery.