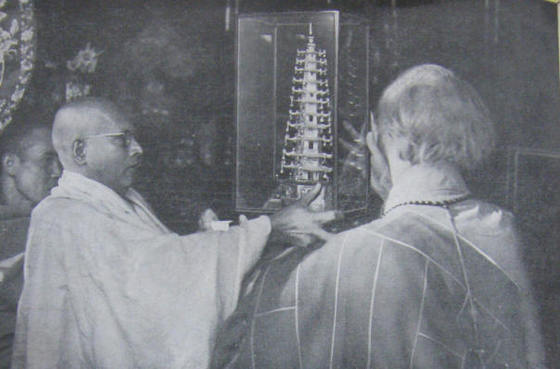 During the year 1952/53, Master Xu Yun received a Theravada delegation from Sri Lanka at the Guang Ji Temple in Beijing.  At this time Master Xu Yun was in his 113th year of life.  On page 147 of the 1988 Element Books edition of Charles Luk’s English translation of the Chinese biography entitled ‘Empty Cloud The Autobiography of a Chinese Zen Master Xu Yun’ (edited by Richard Hunn), it states the following:

‘On the thirteenth of the eighth month, the Master welcomed the Ceylonese Buddhist delegation (to the) Guang Ji Monastery on behalf of the Chinese Buddhist Association.  The delegation was headed by Bhikkhu Dhammaratna who came to present a relic of the Buddha, a Pali Sutta written on pattra (palm-leaves) and a Bo-tree sapling.  Over two thousand devotees were present at the reception.’

This picture depicts Bhikkhu Dhammaratna (达马拉塔纳法师) presenting a stupa in a glass case to Master Xu Yun, (possibly containing the relic of the Buddha), who graciously accepts this Dharma-gift on behalf of the Chinese Buddhist Association.  This is possibly the only photograph of Xu Yun’s back in existence.  The accompanying Chinese text confirms these basic details. 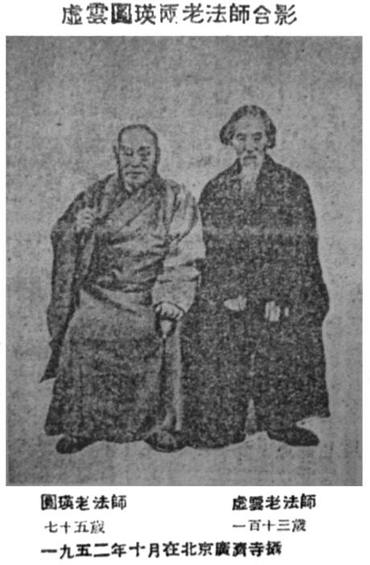 Master Xu Yun is sat to the right, with Master Yuan Ying sat to the left.  It is 1952/53 and Xu Yun is attending the Asia Pacific Regional Peace Conference at the Guang Ji Temple in Beijing.  The accompanying Chinese text also states that both masters are attending a Preparation Council to discuss the re-establishing of the Chinese Buddhist Association.  The Chinese text under each master in the photograph states their ages as; Master Yuan Ying = 75 – Master Xu Yun = 113. 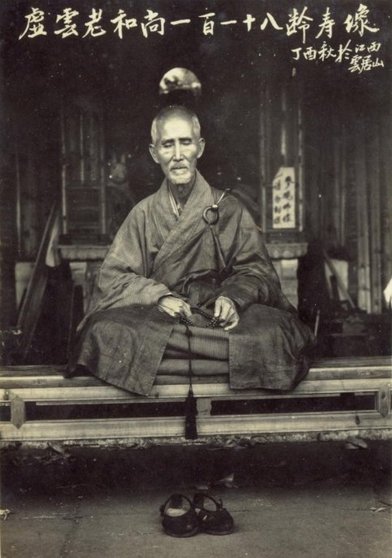 The Chinese text across the top of this picture states that Master Xu Yun is in his 118th year of life. This was a troubled year for the Zhen Ru Monastery on Mount Yunju.  Although repairs to the buildings and grounds were going well, the local governmental authorities cancelled the 1953 agreement allowing the monks to reclaim land, and sent their officials to confiscate it yet again.  In the process Master Xu Yun was thrown out of his cowshed.  Master Xu Yun complained to the government in Beijing who immediately ordered the local authorities to stop harassing the monks. This they did, but caused so much trouble locally that in the end Xu Yun had no choice but to hand over the land. In the meantime, Master Hai Deng had taken over the temporary Abbotship of Zhen Ru and expounded the Lotus Sutra and founded a Buddhist Study Centre. 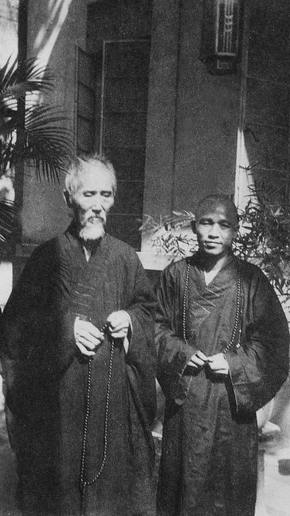 In 1946/47, Master Xu Yun was in his 107th year, when he was asked to travel to the Six Banyans Temple in Guangzhou, the capital city of Guangdong province, to organise a ceremony involving sutra reading for the welfare of the spirits of those killed in the war.  In this photograph, Master Xu Yun is stood outside the Zou Lu Mansion in Guangzhou, next to Master Zhi Ding. 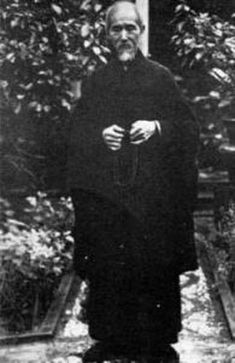 The Chinese text accompanying this photograph suggests that this picture of Master Xu Yun - standing and meditating whilst using a mala (Buddha beads) – dates from around 1946/47, and was taken in Guangzhou city, Guangdong province.  This was probably at the Six Banyans Temple where Xu Yun was visiting to hold a ceremony for the welfare of the dead. 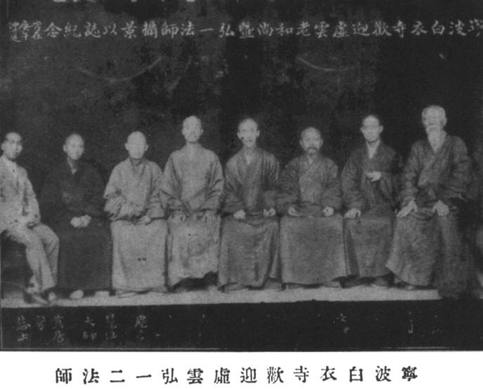 What is interesting about this photography is that it features Master Xu Yun and vinaya Master Hong Yi together at the Bai Yi Temple situated in Ningbo, Zhejiang province.  The date is given as the 19th year of the Republic (founded in 1912), this would equate to 1930/31, as a Chinese lunar year overlaps with two Western solar years.  The date is given as 1930 and this corresponds with the traditional recording of the date in the Chinese text as ‘Geng Wu’ (庚午).  This meeting occurred during midsummer.  The Chinese calendar is comprised of 12 lunar months, with each month associated with a particular zodiac animal.  The 12 animal signs repeat 5 times over a period of 60 years – this is 1 cycle of the Chinese calendar.  The Geng Wu designation is the 7th year (1930) of the 77th cycle since the Chinese calendar began - when Yellow Emperor ruled China – well over 4000 years ago.  This is curious because Xu Yun’s biography (in English translation) states that at this time Xu Yun was initially in Shanghai before heading to Mount Gu monastery to assume the Abbotship there.  Xu Yun was in his 90th year at this time, and very busy with improving things on Mount Gu.  The biography, however, does record that in 1928/29, Xu Yun visited the King Ashoka Monastery at Ningbo to worship the Buddha-relics held there. 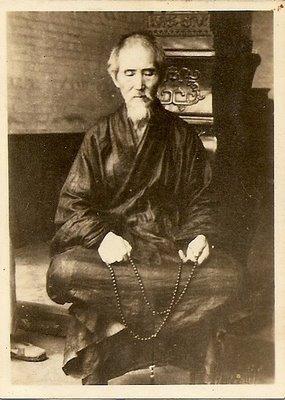 This photograph has no date or information attached to it.  However, from Xu Yun’s hairstyle, beard, white inner garment, robe, and mala, it appears very similar to a picture taken of him meditating outside at the Temple of the Three Buddhas, in Wuchang in 1952/53.  In that year, Xu Yun was in his 113th year of life.  This may well be a photograph taken inside the Three Buddhas Temple. 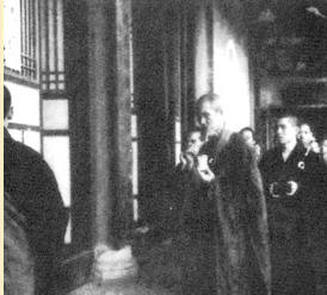 In 1947, Master Xu Yun was invited to Guangzhou, the capital city of Guangdong province, to perform a ritual for the welfare of those who had died during China’s war with Japan.  In this year Master Xu Yun was in his 107th year of life.  He performed the ceremony of welfare for spirits on the water and land at the Temple of the Six Banyans.  After this he went to the Kai Yuan Temple situated in the city of Chaozhou (situated in eastern Guangdong), where he transmitted the precepts.  The accompanying Chinese text says that he performed the purification ritual after transmitting the precepts, but does not give the name of the temple.  The English translation of his biography –Empty Cloud (translated by Charles Luk) – states that the ceremony of purification occurred at the Six Banyans Temples, whilst the precepts were transmitted at the Kai Yun Temple. 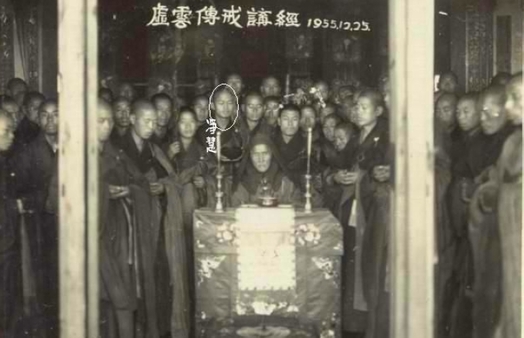 Master Xu Yun at the Zhen Ru Monastery situated on Mount Yunju in Jiangxi province.  The year is 1955/56 and the picture is dated as the 25 day of the 12th lunar month.  Master Xu Yun is in his 116th year of life.  The monk stood behind and (slightly to the left) is Xu Yun’s student – Master Jing Hui.  Late in that year many hundreds of monks came to Mount Yun Ju to receive ordination from Xu Yun.  This picture probably shows Xu Yun transmitting the precepts to the monks, or is a symbolic representation of the ceremony. 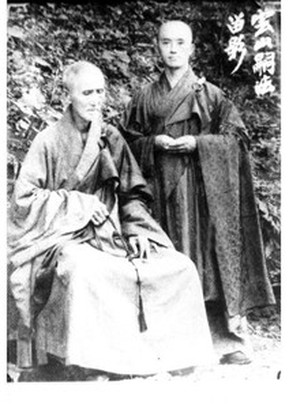 The English translation of Master Xu Yun’s biography (Empty Cloud translated by Charles Luk and edited by Richard Hunn) states that in the year 1957/58 – Xu Yun’s 118th year of life – the following occurred;

‘Abbot Hai-deng of the monastery expounded the Lotus Sutra, after which he selected thirty young monks to form a Buddhist Study Centre to train the novices.’ (Page 204)
Page 1 2 3 4 5 6 7 ​8