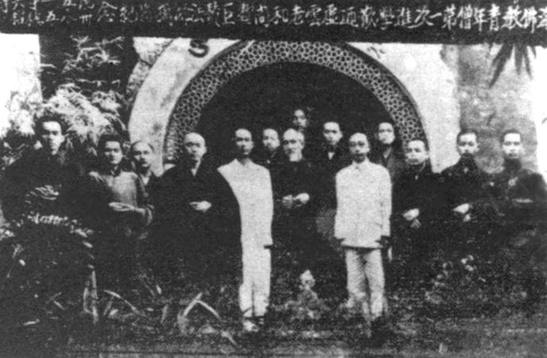 In 1946/47 Master Xu Yun was in his 107th year of age.  In this year he was invited by officials to travel to the Temple of the Six Banyans located in Guangzhou city, Guangdong province.  Here Xu Yun organised prayer and sutra readings to appease the spirits of those who had died in WWII in China.  Xu Yun’s biography states that over 100,000 people came to the temple to witness the sudden blossoming of peach trees in the temple grounds.  The Chinese text accompanying this picture states the date in the Western calendar as being the 10th day of September, 1946, but adds that in the Chinese lunar calendar the date was actually the 15th day of the 8th lunar month.  It also says that Master Xu Yun is standing with Master Ju Zan (fourth from left). 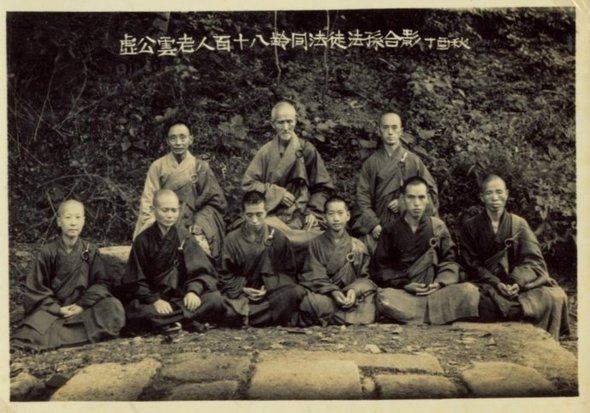 In the autumn of 1957, Master Xu Yun was in his 117th year of life and staying at the Zhen Ru Monastery situated on Mount Yunju, Jiangxi province.  He was busy rebuilding the site by repairing and restoring the buildings and cultivating the grounds.  During this time, it became known throughout the country that Xu Yun was active in the area, and this attracted many hundreds of novices who wanted ordination from him.  Many thousands came to the monastery and in the end Xu Yun had to resort to the expedient of transmitting the ordination precepts at a distance, (to temples far away), in an attempt to prevent more people descending upon MountYunju.  The accompanying Chinese text says that this is a group photograph of Dharma followers with Xu Yun, and mentions that the monk to the left of Xu Yun is the Abbot of Zhen Ru – Master Xing Fu, and the monk to the right is Master Hai Deng – the famous Shaolin gongfu master.  When Xu Yun sent Xing Fu on an errand from Zhen Ru, he made Hai Deng the acting abbot for a time.  Hai Deng relinquished this post when Master Xing Fu returned from his journey. 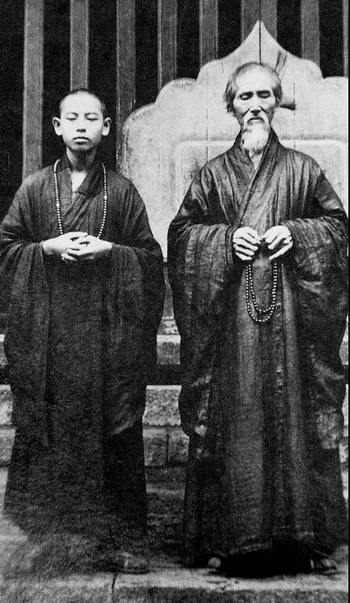 In 1946, Master Xu Yun was in his 107th year of life.  He was invited to the Temple of the Six Banyans in Guangzhou, Guangdong province, to perform a ritual for the welfare of the spirits of those killed in the war.  After this, he was invited to go the city of Chaozhou (in eastern Guangdong), to teach the Buddhadharma at the Kai Yuan Temple.  At the Kai Yuan Temple, a great number of devotees came from far and wide to receive the teaching. In this picture (taken at the KaiYuan Temple), Master Xu Yun is stood with Master Yi Zhao. 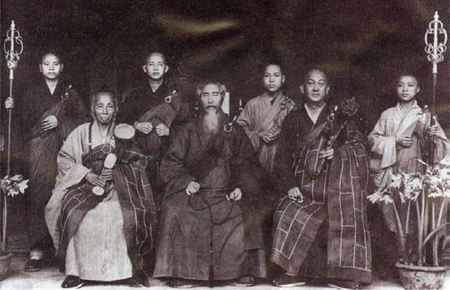 This photograph was taken in 1934 on Mount Gu, at the Yong Quan Temple, Fujian province, when Master Xu Yun was in his 94th year of life.  As Abbot he performed a yearly ceremony transmitting the ordination precepts to monks and nuns.  In certain Chinese language sources, this photograph is mistakenly dated to 1924, but Xu Yun was not in this area at that time.  Professor Wang Rong Guo of Xiamen University has written a short but authoritative article about the correct date of this picture which can be accessed here: Clearing the Dust from a Xu Yun Photograph

‘During the 23rd year of the Republic of China (1934), during the spring initiation for monks, Xu Yun presided over the ordination of a great many monks.  Shan Hui was employed as Director of Duties, and Fu Ren as Director of Ceremonies.  The five and eight vows were transmitted.  The transmission lasted for one month from the tenth day of the third lunar month, until the tenth day of the fourth lunar month.  There were 108 men and women who ordained and received the precepts.  They came from Guangdong, Quanzhou, Taiwan, Hangzhou, Shanghai, and other places.  During each day there were lessons about the Dharma held in the meditation hall during the ordination period.  Early on the eighth day an assembly was held for bathing the Buddha. On the tenth day the ordination precepts were successfully transmitted.  A placard was issued proclaiming this event and a photograph taken to commemorate it.’

The above is extracted from the original Chinese language version of Xu Yun’s biography, as compiled by the scholar Cen Xue Lu.  To the left of Master Xu Yun is the monk Jie Da (Director of Ceremonies), and to the right of Xu Yun is the Ch’an master Fu Ren (Director of Duties). 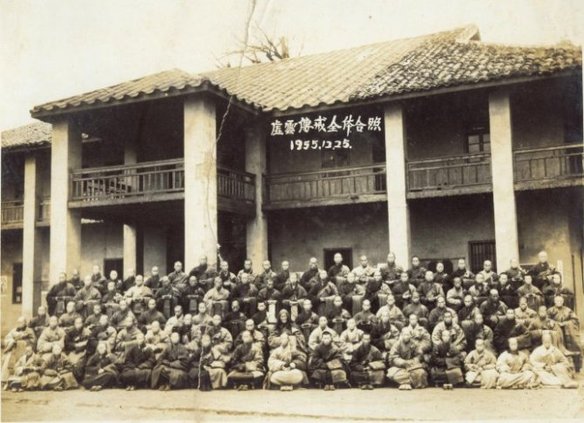 In the year 1955/56 Master Xu Yun was in his 115thyear of life.  He was living at the Zhen Ru Monastery, on Mount Yunju, Jiangxi province.  He continued his work of repairing the many buildings that comprised the monastery complex, whilst continuously transmitting the precepts and ordaining monks and nuns at regular intervals.  As news spread of the Master’s activities, over a thousand monks eventually stayed at the monastery in thatched huts specially built for them. By the time of this photograph – the 25th day of the 12th month, Xu Yun was holding daily Dharma-talks for those assembled.  These Dharma-talks were duly recorded and preserved for future generations.  On this day many photographs were taken all around the grounds of the Zhen Ru Monastery – including the main hall pictured here. 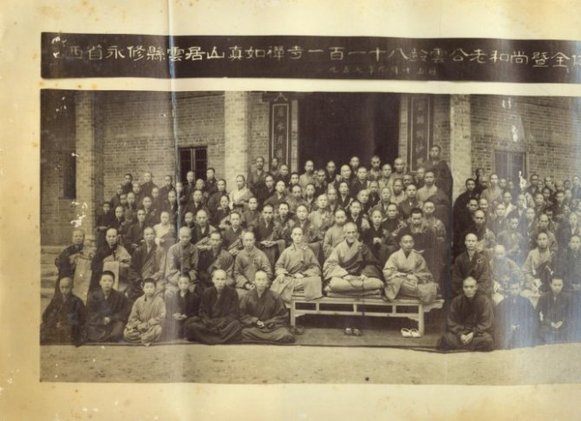 In 1957/58 Master Xu Yun was in his 118th year of life.  This group photograph features Xu Yun and a group of ordained monks at the Zhen Ru Monastery, on Mount Yunju, Jiangxi province.  This was a time of trouble with the local authorities who at one time evicted Master Xu Yun from the cowshed he used to sleep within.  The shed was only returned to him after the Beijing authorities interceded on his behalf. Master Xu Yun sent Abbot Xing Fu on an errand, and while he was gone, the gongfu Master Hai Deng temporarily took his place. 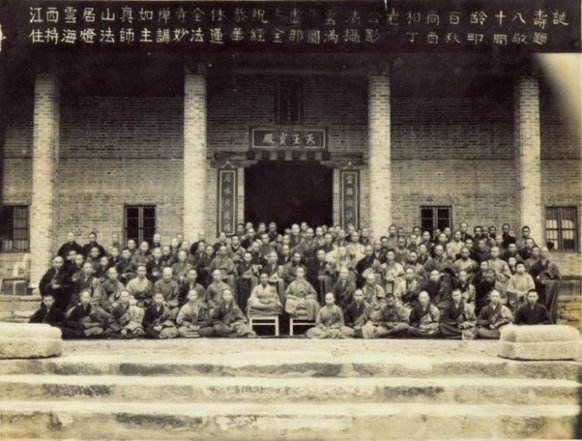 Master Xu Yun was in his 118th year of life in 1957/58 and his work of repairing the many buildings of the Zhen Ru Monastery was progressing well.  This work included the cultivation of waste ground previously unused for the growing of crops to feed the people staying on Mount Yunju, Jiangxi province.  Whilst organising this work, Xu Yun continued to teach and transmit the precepts at regular intervals.  He did this whilst having to deal with the local authorities who were antagonistic toward this spiritual community, and tried their best to sully the Master’s good name whenever an opportunity presented itself.  Xu Yun ignored all these distractions and focused solely upon the preservation and teaching of the Dharma. 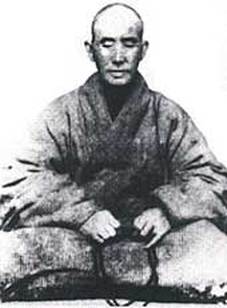 This is a curious photograph of Xu Yun as he looks relatively young.  However, as the fourth finger of his left-hand is missing, this picture could not have been taken before 1897/98 when Xu Yun was in his 58th year of life.  In fact the accompanying Chinese text states that this is the Venerable Monk Xu Yun at the Cao Xi Temple in 1947 transmitting the Thousand Buddha Arahant Great Vows to monks and nuns.  This is the temple of Huineng – the Sixth Patriarch of Ch’an Buddhism – located in northern Guangdong province and also known as the Nan Hua Temple (南華寺 – Nan Hua Si).  Despite Xu Yun looking ‘young’ in this photograph (where his head and beard appear to have been freshly shaved), he was already in the 108th year of his life in 1947/48. 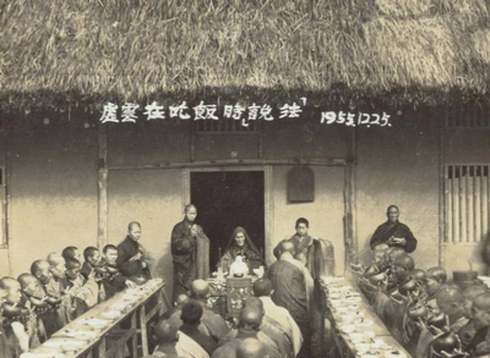 This photograph is dated to the 25th of December, 1955.  Master Xu Yun was repairing the Zhen Ru monastery and grounds situated on Mount Yunju, Jiangxi province.  Here the master has place of honour in the dining hall.  The monks are silent and disciplined.  Xu Yun’s biography states that the master refused an invitation to Beijing on the grounds of old age, and instead held a Ch’an Week. 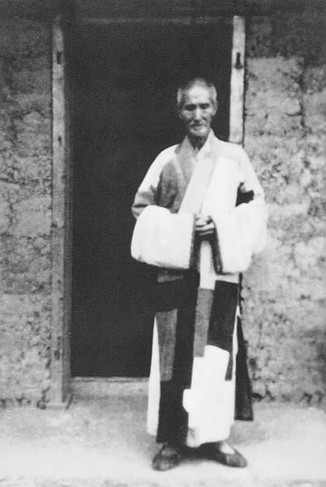 Whilst living on Mount Yunju (Jiangxi province) in the 1950’s, Xu Yun preferred to live in an old cowshed situated half a li north-west of the Zhen Ru Monastery.  Even when it burnt down, he asked for it to be re-built as he preferred its primitive charm and remote location.  Monks and nuns were often surprised to see Xu Yun living in such a building especially since far better accommodation was available in the monastery itself.  Here, Master Xu Yun wears the patch-work robe.
Page 1 2 3 4 5 6 7 8