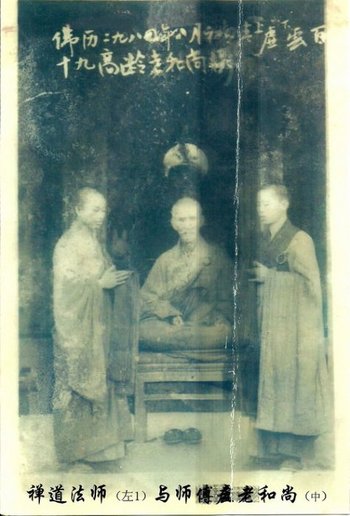 In 1957/58, Master Xu Yun was in his 118th year of age.  This photograph was taken at the Zhen Ru Monastery, Mount Yunju, Jiangxi province.  At this time the master was busy continuing extensive repairs to the monastery and grounds. In his autobiography it states that Xu Yun repaired scores of temples all over China.  When he arrived at a new place, all had as a possession was his staff – when the temple had been repaired and handed over to another monk – Xu Yun would leave with exactly the same staff that he arrived with.  He accumulated no other possessions, and refused to amass any wealth, acting entirely in accordance with the Vinaya discipline.  The monk to the left of Xu Yun is named as Dharma Master Ch’an Dao. 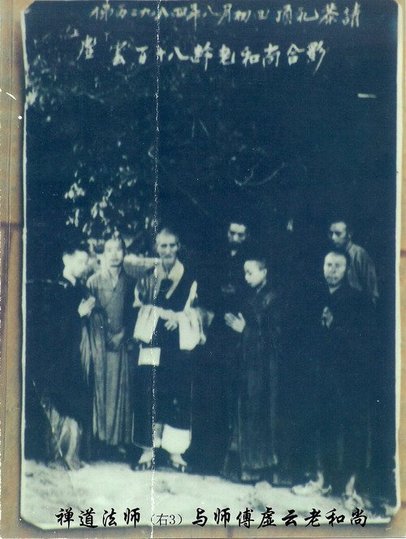 The monk Ch’an Dao stands to the left of Master Xu Yun in 1957/58 at the Zhen Ru Monastery on Mount  Yunju, Jiangxi province.  China follows the old Buddhist calender and the Chinese text describes the year as 2984 since the passing of the Buddha.  Other disciples stand respectfully around both monks.  Master Xu Yun is in his 118th year. 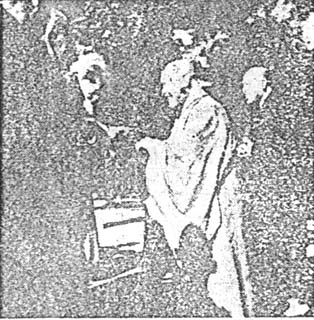 Master Xu Yun greets Master Yuan Ying.  In 1952/53, Xu Yun and Yuan Ying are attending the Asia Pacific Regional Peace Conference at the Guang Ji Temple in Beijing.  Although this picture is unclear, it appears to show Xu Yun (with long hair and beard) standing to the left, with the shaven headed Yuan Ying standing to the right. At this time Xu Yun was in his 113th year of life. 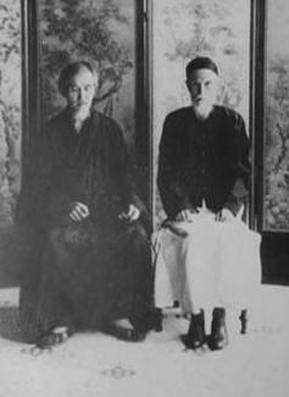 Master Xu Yun, wearing his black robe, and with long hair and beard, sits for a professional photograph, taken in a studio setting.  The background is comprised of a number of connected, painted silk panels housed in wooden frames, displaying the theme of branches and leaves.  Sat to the right of Xu Yun is an unnamed elderly scholar and lay-Buddhist.  Although no Chinese text accompanies this photograph, and given that anything gained only from the picture itself is speculation, it is true to say that Xu Yun is wearing the same (or similar) black robe seen during his time at Wuchang in 1952/53 (his 113th year) – where other photographs were taken at the Temple of the Three Buddhas. 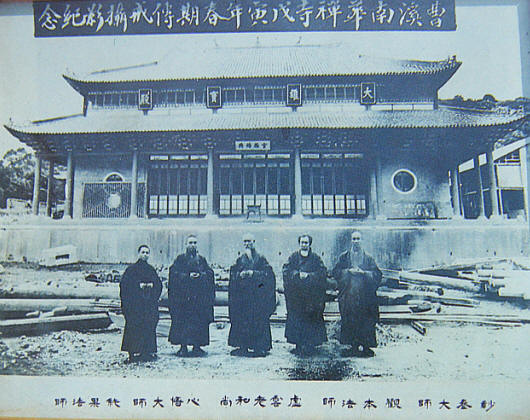 In 1938/39, Xu Yun was in his 99th year of life.  In the spring of that year he transmitted the precepts at the Nan  Hua Temple, Guangdong province.  Here, he is photographed whilst stood outside the Nan Hua Templewith other participants of the ceremony (and ritual) that was well attended.  The experience was said to be wonderful, and produced good karma by purifying the mind (and body). 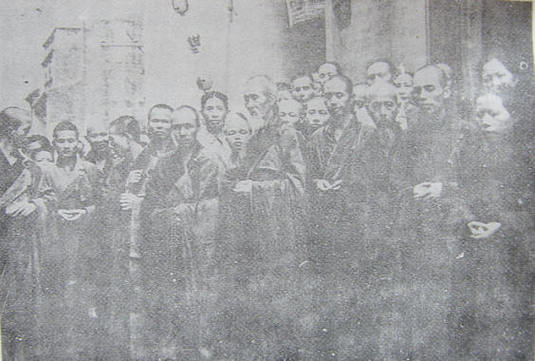 In 1946/47, Master Xu Yun was in his 107th year of life.  Xu Yun’s autobiography (Empty Cloud: Luk & Hunn 1988, Pages 132/33) states that in the autumn of this year, Xu Yun was invited to Guangzhou to hold a prayer meeting dedicated toward the welfare of those who died during WWII.  This took place at the Temple of the Six Banyans, and not only did rare plants flower on the occasion, but over a 100,000 people attended.  The Chinese text accompanying this picture ascribes this photograph to early 1946, and talks about a Bodhi-Vihara Monastery in Guangzhou, and says that a recently constructed training hall (for monks) was opened by Xu Yun.  This picture of that event is probably from the autumn of 1946, as in early 1946 Xu Yun was still at the Yun men Monastery. 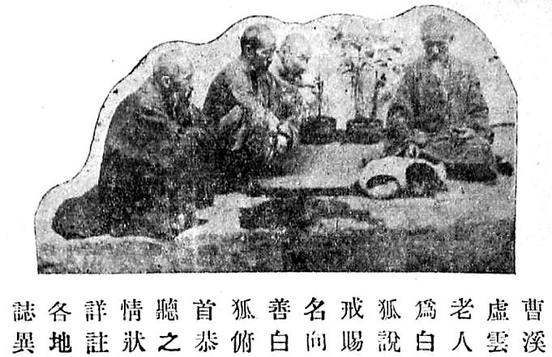 In 1936, Xu Yun was in his 96th year of life.  At that time an important military man visited the Nan Hua Temple to talk with Xu Yun, and brought with him a white-furred fox.  The full story of this incident does not appear in Empty Cloud (the English translation of Xu Yun’s autobiography made by his disciple Charles Luk), but can be read at this link:

The accompanying Chinese text states that this picture is of Xu Yun and other monks at the Nan Hua Temple in 1936, who are witnessing the fox take refuge in the Buddha, Dharma, and Sangha. 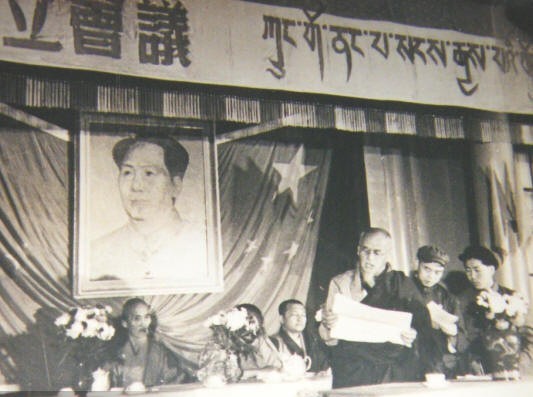 Master Xu Yun –along with other representatives of different Buddhist schools and lineages in China – sits serenely under a portrait of Chairman Mao.  The Chinese text accompanying this photograph states the date as being the 30th of May, 1953, however, this appears to be the adjusted date for the Western calendar.  In Empty Cloud – Charles Luk’s English translation of Xu Yun’s Chinese language autobiography – the following is stated on Page 188 of the 1988 Element Books edition, which reads:

‘In the fourth month, the Master received a telegram asking him to the capital, where he stayed at the Guang-ji Monastery.  After representatives of the Sangha from all parts of the country had arrived, the new Chinese Buddhist Association was formally inaugurated and proceeded to discuss and pass several important resolutions.  When some degenerate monks proposed the abolition of the standing rules of discipline and morality, the Master reprimanded them and wrote a statement entitled the ‘Degeneration of the Sangha in the Dharma-ending age’.

Mao Zedong (and Zhao Enlai) of the Chinese government listened to Xu Yun, who demanded that the observance of the Vinaya Discipline (for an ordained Buddhist monastic in China) - be written into secular Chinese law – a motion that was duly passed.  Chinese Ch’an is distinguishable from Japanese Zen as the former demands the observance of the Vinaya Discipline by its adherents, whilst the latter does not.  The English translation of Xu Yun’s text entitled ‘Degeneration of the Sangha in the Dharma-ending’, can be read at the following link:

Degeneration of the Sangha in the Dharma-ending 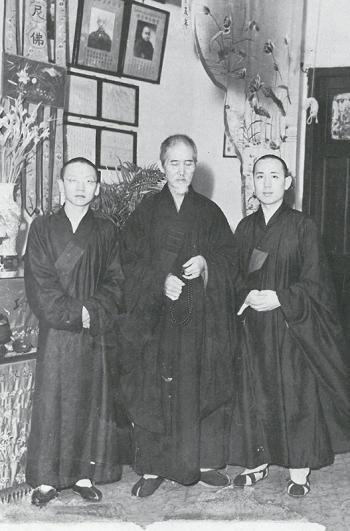 ‘I then proceeded to Hong Kong where I expounded the sutras at the Temple of Ci-hang Jin-yuan at Shatin, held a week of Pure Land meditation and taught the refuge formula and five precepts at the Temple of Dong-lian Jue-yuan (Enlightenment Garden of the Eastern Lotus).  After that I returned to the Yun-men Monastery.’

The Chinese text accompanying this photograph states that Master Xu Yun was kindly invited to the True Enlightenment Lotus Society, and that the Bhikshu on Xu Yun’s right is Dharma Master Jue Guang (觉光法师)[1919-2014], and that the Bhikshu to his left is Dharma Master Yue Tan (优昙法师)[1908-1993].  This photograph is from the personal collection of Dharma Master Jue Guang.  It appears that Master Xu Yun visited the True Enlightenment Lotus Society (a charitable Buddhist organisation founded in 1945) when he visited Hong Kong in 1948. 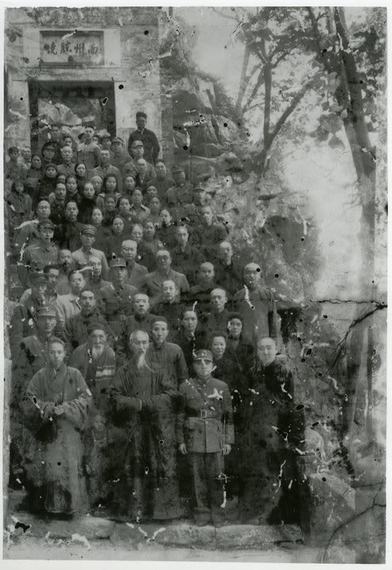 ‘I left Nan-hua on the sixth of the eleventh month and when I arrived at the sacred mountain of Heng-shan in Hunan Province, I offered incense at the monastery there and met Upasaka Xu Guo-zhu who had been sent by Marshall Li-ji-shen to invite me to Guilin.  On arrival, I stayed at Mount Yue-ya when monks, nuns, male and female lay devotees came and asked to be disciplines of mine.’

The Chinese text accompanying this photograph states that in 1942 in Guilin, people from all walks of life gathered to welcome the venerable old monk Xu Yun.