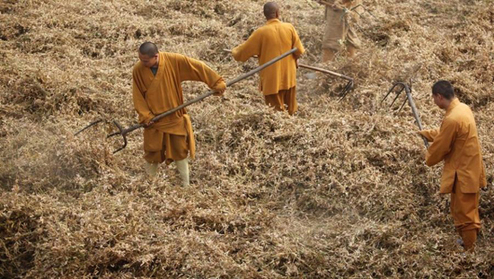 Translator’s Note:  For Chinese Buddhist monks living in the countryside, working in the temple grounds, or cultivating the surrounding fields for crop-growing, are very important activities for sustaining the monastic community. This is because of ancient imperial decrees that forbid Buddhist monastics in China from eating meat, and ensuring that a pure vegetarian diet is followed.  As imperial decrees also forbid Chinese Buddhist monastics from ‘begging’ their daily food, they must act as farmers and grow their own rice and vegetables, and maintain their own water-supply.  The Ch’an School simply extended the concept of meditating in the temple hall, to meditating in the fields as work was undertaken.  For lay Ch’an Buddhists, the concept of daily ‘work’ can take many forms that involve the brain and the body.  However, one element of ‘working’ within the Ch’an School that unites both monastics and the laity, is that of putting a great and sustained effort into effective self-cultivation.  This involves the practice of effective seated meditation – as it does meditation whilst moving the body around – and an extension of this within the Chinese Buddhist tradition is that of perfecting the martial arts.  Another crucial element of ‘work’ includes any and all altruistic acts of Bodhisattva mercy and compassion.  However, the true spirit of ‘work’ is that endeavour which directly ‘sees through’ the subject-object duality, and although movement is involved, the ‘movement’ itself is forever ‘still’, and that which seems ‘full’ is known to be ‘empty’. The kind of work discussed here is not ‘waged’ labour.  It is not labour motivated by the gain of personal, or material profit.  It is instead, the ‘selfless’ labour of pure motivation that works solely for the welfare of all beings, and in so doing, assures the attainment of universal enlightenment.
ACW 13.4.2013

What is Ch’an practice?  It is said to be summarised in the statement: ‘A day without work, is a day without food.’  This famous instruction was developed by Ch’an Master Baizhang Huai Hai (百丈怀海) who personally exemplified the true spirit of Ch’an practice in his everyday life.  The example of Huai Hai was revolutionary at the time, and transformed Ch’an Buddhism by breathing a new vigour into its practice.  This is how the concept of ‘agricultural Ch’an’ developed the emphasis that Buddhist monastics should work in the fields and participate in the process of food production.

The Forest Tradition of Ch’an Buddhism contains the concept of ‘performing service’ (作务 – Zuo Wu), and this explains why many Ch’an texts mention numerous examples of Buddhist monastics working in the fields and performing agricultural labour.  This example was very different from the early times when Buddhism first entered China, and the Confucians criticised the Buddhist monastics for ignoring work and being non-productive.  The Confucians further defined this criticism by stating that Buddhist men did not farm, and Buddhist women did not weave.  As part of the integration of the (Indian) Ch’an tradition into Chinese culture, it was the Fourth Ch’an Patriarch Dao Xin (道信) who introduced the idea that Buddhist monastics should participate in agricultural labour, but it was not until Master Baizhang Huai Hai wrote this requirement into his ‘Pure Regulations’ (清规 – Qing Gui) that it spread throughout China and was universally applied.

This innovation meant that every single Ch’an monastic, whether living in the remote mountains or not, had to productively participate in the growing of food to eat and porridge to drink. In fact, Ch’an Master Baizhang Huai Hai participated fully in the very system he advocated to such an extent that when he was old and unable to stand properly, he still walked to the fields to carry-out agricultural work.  Concerned for his well-being, his disciples hid his tools, but as he could not work, Baizhang simply stopped eating.  This is how the saying ‘A day without work, is a day without food’ came about, which was a development from Dao Xin’s earlier advice to participate in meaningful daily work.  Since then, Baizhang’s example has become a model that has served to inspire endless generations of Ch’an Buddhist practitioners.

Ch’an meditation can be practised whilst sitting or moving the body around.  Ch’an work involves agricultural labour, but also many other types of work, as it is not limited to working in the fields.  Ch’an is the heart of existence, and constructive effort is the heart of Ch’an practice.

(Article: Board of Directors – Published in the Qing Liang [清凉] Temple, situated in Nanjing)