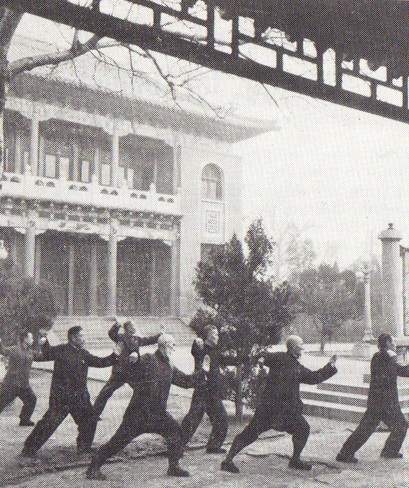 He who is controlled in hand, in foot, in speech, and in the highest (i.e. the head); he who delights in meditation, and is composed; he who is alone, and is contented, - him they call a Bhikkhu.
(The Buddha - Dhammapada: Bhikkhu Vagga; Chapter 25, Verse 3)

The practice of well organised (and highly specialised) martial arts is thousands of years old in China.  It was an old tradition when the great sage Confucius (551–479 BCE) stated:

In shooting arrows, it is not (piercing) the leather (centre of the target) that is the law of archery, this is because not everyone is of equal strength; this is the Way of the Ancients.
(Analects (Lun Yu): Book 3 – Chapter 16)

By around 500 BCE it is obvious that Confucius (Kongfuzi) was aware of two distinct approaches to martial practice:

Confucius advocated the second approach as being the most mentally and physically effective for the practitioner (and society) in the long term.  He also equated training the mind (through scholarly pursuit), with training the body (through martial discipline). 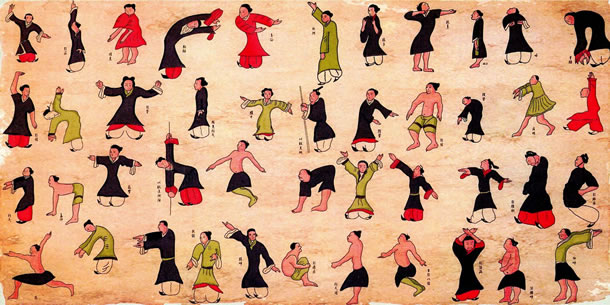 Mawangdui Daoyin Silk Manuscript - circa 168 BCE
In fact, Confucius did not distinguish between a ‘scholar’ and a ‘warrior’.  He used the Chinese ideogram ‘士’ (Shi) to refer to a learned, or enlightened gentleman (君子 – Jun Zi), otherwise known as a ‘Lordly Master’.  The Scholar-Warrior was not only a noble position in feudal Chinese society, but also referred to a rank of official, and denoted anyone who spent their life in cultivating education.  This type of learning includes on the one hand the correct study of ancient books of wisdom, and on the other, the disciplined practice of the martial arts, both armed and unarmed.  The armed practice included the Chinese long sword (剑 – Jian), and bow (弓 – Gong), the latter, of course, used in the art of archery (射 – She).  A Confucian scholar, whilst training for the imperial examination, had to be able to fire arrows with similar proficiency from both sides of his body.  The unarmed preparation for this ability is preserved in modern Qigong practice and is known as the ‘drawing the bow’ exercise. Archery, within Chinese feudalistic society, was developed to a very high degree of physical skill and mental awareness – an example of ‘spiritualised’ martial training that has been used throughout Chinese history, and which facilitated the integration of martial training into Indian Buddhism, upon its arrival in China around the 1st century CE. This is why contemporary Chinese Buddhists routinely practice martial arts as part of their spiritual cultivation.

The famous Shaolin Temple in Henan is a centre of Ch’an monastic training combined with martial arts practice.  However, many Ch’an temples throughout China (other than Shaolin) make use of martial arts practice to maintain physical health and mental agility.  Spiritual cultivation has within its physical component the idea of living longer, so that training can be pursued throughout the years, for maximum benefit to the practitioner.  This type of cultivation has been linked to many people living well over one hundred years in age in China.  Indeed, the Chinese book (published in 1989), and entitled ‘Practical Ways to Good Health Through Chinese Traditional Medicine (China Reconstructs Press, Beijing), features the remarkable Mr Hu Yuanqing, who at time of publishing was recorded as being 120 years old: 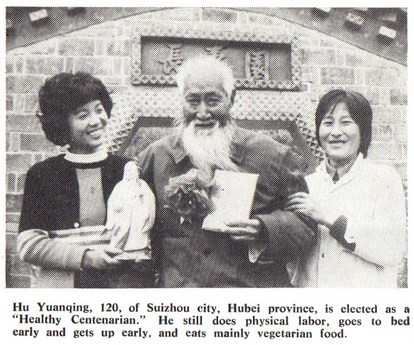 The concept of Martial Virtue is the conveying of the traditional concept of martial spirituality that permeates Chinese culture.  This is not the practice of violence.  Instead Martial Virtue refers to the practicing of ancient martial arts developed on the battlefield, but which have been evolved to a higher level that involves not only the study and perfecting of practical fighting techniques, but also the focusing, strengthening, and developing of the human mind so that it perceives reality at a far higher frequency than is usually expected.  An example of a guiding philosophy for this path is in the Training Hall Code of the Ch’an Dao Martial Arts Association:

This code, and others like it, exists to develop martial virtue, or the ability to retain a calm and composed mind regardless of physical circumstance.  This is the practice of detachment from external stimulus, and the cultivation of boundless energy (氣 – Qi), wisdom (慧心 – Hui Xin), and compassion (同情 – Tong Qing).  When the mind and body are in harmonious accord, the life expectancy of each individual is increased.  Of course, not everyone will live to 100 years old, but everyone will live longer through training than through an indulgent lifestyle that has no discipline. True spiritual freedom is the consequence of correct limitation applied in the right way, at the right time.  All discipline is a guide toward the state of disciplined non-discipline.

A wise way to preserve one’s health is to conform to the changes in the four seasons and accordingly adjust one’s living habits.

It is believed that in ancient times in China, many people lived to 100 years old (or more) by practicing various forms of body-building suitable to their natural condition.  The Daoist immortal Peng Zu (彭祖) is recorded as living 800 years through the practice of qigong (氣功) and daoyin (導引) exercises.  He lived near the end of the Shang Dynasty, (around 1100 BCE), and is said to have outlived his 49 wives and 54 sons.  As he had mastered qi flow, he was able to heal others as the need arose, by sealing the qi energy into their bodies so that it could nourish and repair their inner organs.  Peng Zu never deviated from the flow of nature. 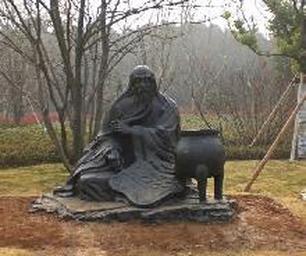 Immortal Peng Zu
Bodhidharma, the 28th Indian Patriarch of Ch’an Buddhism, arrived in China around 520 CE.  He is attributed to introducing limbering-up exercises for the tendons which were incorporated into Chinese martial arts at the Shaolin Ch’an Temple of Henan.  It is through the practice of these exercises that Bodhidharma’s disciple – and 2nd Chinese Ch’an Patriarch – lived to more than 100 years of age.  Developing advanced abilities in martial arts practice has enabled many to achieve spiritual enlightenment, longevity, and extraordinary feats on the battlefield.  Acting in accordance with the seasons, the Yellow Emperor’s Classic of Internal Medicine advises: 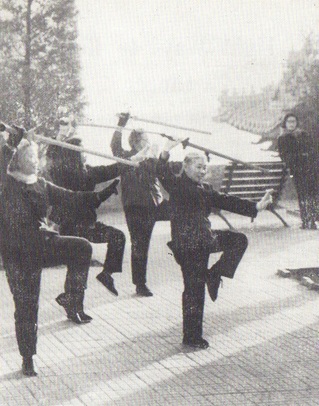 Martial Virtue is based upon cultivating a compassionate attitude that transforms an act of potential violence into an expression of peace. Martial Virtue is a great social service that assists the weak, curbs the strong, and cares for the young, the elderly and the disadvantaged.  Martial Virtue is premised entirely upon cultivating a kind personality so that all around are transformed by its presence.  Violence, and the greed, hatred, and delusion it is premised upon, dissolves into a compassionate and pure awareness.  Although the physical techniques that comprise the ‘form’ aspect of martial styles have originated from the battlefield, and are the product of an efficient brutality remembered and preserved through the generations in the martial movements themselves, the movements are transformed from the original ‘brutality’ implicit in their inception, into a state of ‘profound awareness’ that has no correlation with violence or anger.  It is a curious paradox that when preserved as a method of ‘self defence’, these very same ‘transcendent’ movements retain their combat effectiveness and enable the individual (or group) to maintain health, develop the mind and body, pursue a spiritual path, and simultaneously train in a method that adds to the sense of ‘safety’ and ‘security’ within a family and community.  These movements become representative of a‘higher logic’ within a spiritual tradition that is as much physical as it is psychological.  Self defence then becomes a matter of rationally guarding against greed, hatred, and delusion, and never the perpetuation of violence.  This is a distinct Buddhist attitude toward martial practice.  Such a practice is ‘peacefulness’ personified.  The outer expressions that form the traditions of Chinese martial systems become transformed into a yogic practice.  This influence is seen in China as emerging from the Indian Buddhist monk Bodhidharma, whose presence in China is associated not only with the beginning of the Ch’an School, but also with a martial system (18 Arahant Fist) and a set of bending and stretching exercises.  Frescos in the Shaolin Templein Henandepict Chinese monks training in martial arts and qigong (Chinese yoga), alongside (and with) what is believed to be Indian Buddhist monks: 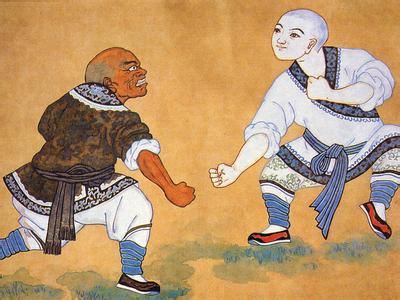 However, just as Confucius advocated the practice of martial arts for self defence, longevity, and the development of virtue, the Daoist tradition has also developed many and varied martial systems.  Taijiquan (太極拳), for instance, probably originated as a Confucian art (as ‘Taiji’ is a term found in the Yijing, a Confucian text), that prepared a student for the rigours associated with drawing the bow in archery practice, whilst Daoists developed a similar principle emphasising Yin-yang theory, and Buddhists placed the emphasis upon the realisation of the empty essence of nature.  All schools, whether Buddhist, Daoist, or Confucian, in reality all train in the cultivation, development, and storage of ‘qi’ (氣), and its use toward various and well defined objectives.  Ch’an practitioners, for instance, focus their attention inward and build-up such a force of qi that it eventually bursts the barriers of conditioned ignorance, revealing the all-embracing nature of the mind that reflects the world, and the world that reflects the mind.  This practice may be seated or standing, still or moving.  This is how martial practice is used to clear the mind, strengthen the body, and return all disruption to peace.