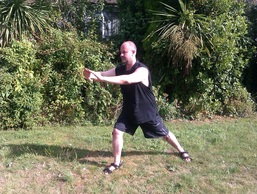 The ICBI announces the creation of a new project that acknowledges the validity of the practice of traditional martial arts as a legitimate path toward self-transcendence.  This aspect of Ch’an Buddhist practice exists throughout China, throughoutAsia, and has spread into the West.

What the Divine Sky has conferred is called the nature:
An accordance with this nature is called the path of duty;
The regulation of this path is called instruction.
The Doctrine of the Middle (Confucius)

Many eminent Ch’an masters such as Hai Deng and Ti Guang – both students of the venerable monk Xu Yun (1840-1959) – were renowned not only for their strong Ch’an practice, but also for their martial abilities.  In this respect, the practice of traditional martial arts in a modern and post-modern setting is absolutely normal in Chinaand other Asian cultures, and is as common throughout Chinese society as the practice of football in the UK, and baseball in the USA.