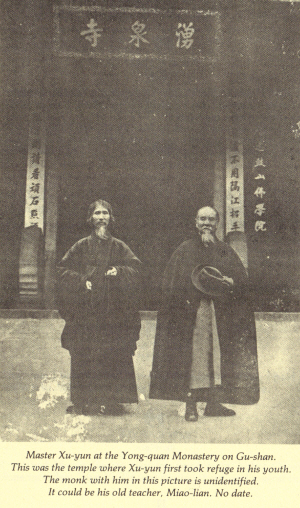 This particular version of this photograph – featuring Xu Yun at the Yang Quan Monastery (Gu Shan) – is taken from page 12 of the 1988 Element Books edition of Charles Luk’s English translation of the Chinese biography entitled ‘Empty Cloud The Autobiography of a Chinese Zen Master Xu Yun’ (edited by Richard Hunn).  The photograph originates from the Buddhist Library of China and is thought to show Master Miao Lian, from whom Xu Yun received full ordination in 1859/60 (aged 20) at Yang Quan, together with the Dharma-names Gu Yan, Yan Che, and De Qing.  There is no date associated with this photograph, but Xu Yun’s hair is beginning to turn grey and both men appear to be middle-aged – that is between 40 and 60 years of age.  This means that this picture could have been taken sometime between 20 to 40 years after their initial meeting in 1859/60, that is between the years 1879/80 and 1899/1900.  The detail that this might be Master Miao Lian stems from the information provided to Charles Luk by the Buddhist Library of China. 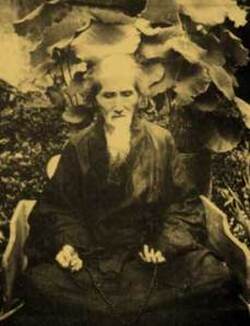 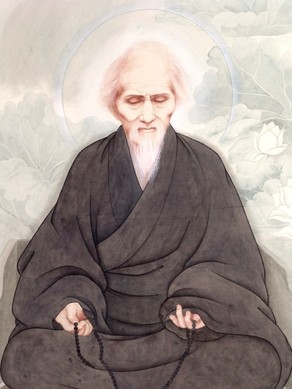 This photograph has been copied and cropped a number of times in China and has a number of equally important manifestations.  Originally, evidence suggests that this was a one of a series of photographs, with the second example in the above collection taken slightly to Xu Yun’s right hand side.  The poem attached (underneath) to this photograph was written by Master Xu Yun and is translated by Charles Luk as:

The wind of karma drove me to Wuchang city
Where my illness causes others so much trouble.
I stayed three months at the Temple of Three Buddhas,
Filled with shame and horror at all my misfortunes.
Mindless of having climbed to the top of the world,
I wait for those who have also vowed to ascend to Bodhi,
Remembering that Guan Zhang-mu on Yu-zhuan Peak
Achieved Reality supreme after hearing a word or two.

The third example is a beautiful example of the development of what might be referred to as Xu Yun iconology, complete with glowing halo.  The unknown artist has produced an exact copy of the position of the hands and use of the mala.  On page 130 of the 1988 Element Books edition of Charles Luk’s English translation of the Chinese biography entitled ‘Empty Cloud The Autobiography of a Chinese Zen Master Xu Yun’ (edited by Richard Hunn) it states that this picture was taken of Master Xu Yun in his 113thyear, (1952/53) at the Three Buddhas Temple, Wuchang.  Unlike the majority of photographs in this book, it is not accredited to the Buddhist Library of China, and appears to have been a personal possession of Charles Luk (1898-1978). 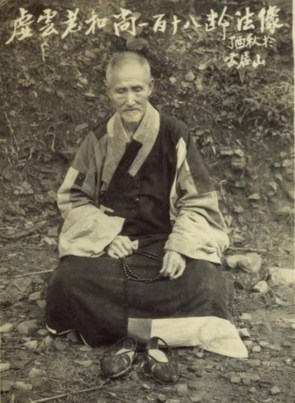 This picture was taken in 1959, Master Xu Yun’s 120th year of life.  At this point in his long life he had nearly completed two full 60 year cycles of the Chinese astrological system.  On page 155 of the 1988 Element Books edition of Charles Luk’s English translation of the Chinese biography entitled ‘Empty Cloud The Autobiography of a Chinese Zen Master Xu Yun’ (edited by Richard Hunn) the caption reads that this picture was taken on Mount Yun Ju, and the Zhen Ru Monastery, the last area to be re-built by Xu Yun in his life time.  Charles Luk attributes this picture to the Buddhist Library of China.  This photograph was also used by Charles Luk in his 1964 book entitled ‘The Secrets of Chinese Meditation’, (between pages 48 – 49), with the caption reading ‘The late Ch’an Master Hsu Yun in 1959’.  Here, Master Xu Yun sits on the rocky ground without a cushion, wearing a patchwork robe and moving the mala through his fingers.  The mind, breath, and touch of mala all emanate equally from the empty mind ground and never deviate from the ‘host in host’ position of the Cao Dong School of Ch’an.  Ch’an and Zen practitioners should take note of the lack of modern comfort and realise that all is the empty mind ground. 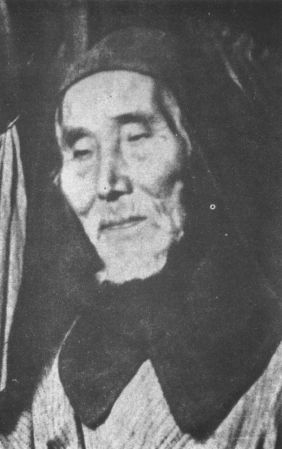 An iconic photograph of Master Xu Yun taken in 1957/58 - when he was in his 118th year of life.  This picture was taken at the Zhen Ru Monastery on Yun Ju Mountain in Jiangxi province, Southeast China.  He continued to organise the repair of a 6 mile track from Zhang-gong Jetty to the monastery, and to reclaim waste-land for monastic use.  However, at this time local officials confiscated the cultivated monastic land and threw Master Xu Yun out of the cowshed he chose to live within. The Central Government in Beijing intervened and the local authority officials withdrew from the area leaving Xu Yun free to return to his cowshed. Master Xu Yun always refused even the most meagre of comforts in his daily life.  On page 114 of the 1988 Element Books edition of Charles Luk’s English translation of the Chinese biography entitled ‘Empty Cloud The Autobiography of a Chinese Zen Master Xu Yun’ (edited by Richard Hunn) this picture appears confirming the date and place, and that it was supplied to Charles Luk by the Buddhist Library of China. 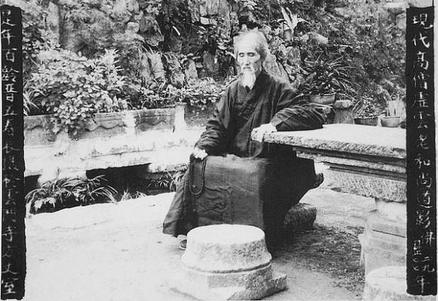 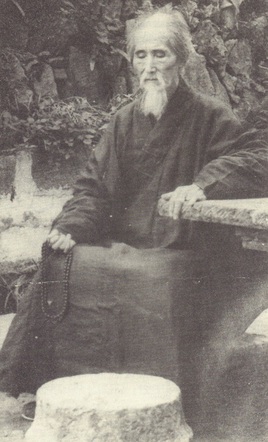 From the type of robe (black tie-across), and length of hair and beard, this picture appears to show Master Xu Yun at the Three Buddhas Temple in Wuchang, Hubei province (1952/53 – in his 113th year).  His left hand can be clearly seen to be missing its ring-finger.  In his 58th year of life (1897/98), Master Xu Yun travelled to the Ashoka Monastery situated in Zhejiang province, with the intention of burning-off his left ring-finger out of respect for his mother who died giving birth to him. Xu Yun never new his mother, but had only seen a photograph of her.  At the Ashoka Monastery he performed three thousand prostrations per day toward the shrine containing the Buddha’s relics.  One night, whilst sat in Ch’an meditation, Xu Yun saw a dazzling bright-green dragon that took him (on its back) high into the sky, and into a land of paradise.  There, he witnessed his mother sat in the room of a palace – he called to her to get on the dragon’s back and fly to the Pure Land!  When the dragon brought him back, he decided the time had come to burn-off his finger and dedicate the merit of this sacrifice to his mother.  The above picture shows Master Xu Yun during his time of recovery from a fearful beating that he had received earlier at the hands of local officials at Zhen Ru Monastery, Yun Men Mountain. 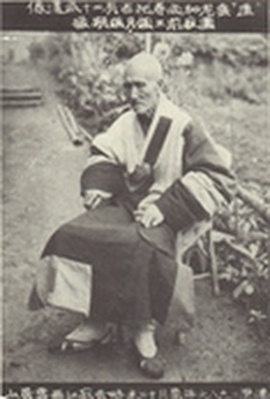 This picture is amongst the last photographs taken of Master Xu Yun.  Here he has his head and beard shaved.  When circumstances permitted, Xu Yun would often perform this ritual around the time of Chinese New Year – where the old year meets the new – but in this instance the ritual has been performed later in the year, apparently in preparation for his own death.  This photograph is from his 120th year of life (1959) on Mount Yun Ju, in the grounds of Zhen Ru Monastery.  He is seated on a chair and appears to be in a state of deep meditation.  In his ‘A Pictorial Biography of the Venerable Master Hsu Yun’, Ch’an Master Hsuan Hua describes this picture as being taken three months before Xu Yun ‘completed the stillness’, or passed away into sunyata. This fact would date the picture to around mid-way through July 1959, as Master Xu Yun entered parinirvana on the 13th day of October, 1959.  During the third month of that year, he had become ill, and following the seventh month his health deteriorated.  Although the Beijing authorities offered medical help, Xu Yun refused and stated that his ‘casual link with the world is coming to an end.’ 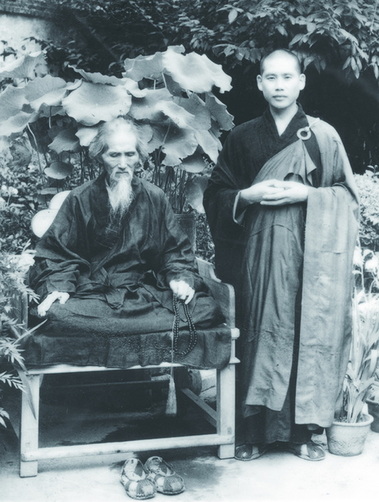 This photograph features Master Xu Yun and a young Master Fo Yuan (1922-2009), who would go on to become a great Ch’an master in his own right.  The picture was taken in Xu Yun’s 113th year of life (1952/53) at the Three Buddhas Temple in Wuchang, Hubei province.  Master Xu Yun sits on a raised meditation platform, whilst Master Fo Yuan stands respectfully to one side indicating that he is a student of Xu Yun’s.  At this time Master Xu Yun, although still weak from an illness (and problems related to local officials) at Yun Men, had been officially summoned to Beijing – Master Fo Yuan accompanied him as his personal attendant taking care of his every need as he travelled northward.  The Chinese text accompanying this photograph confirms these facts; 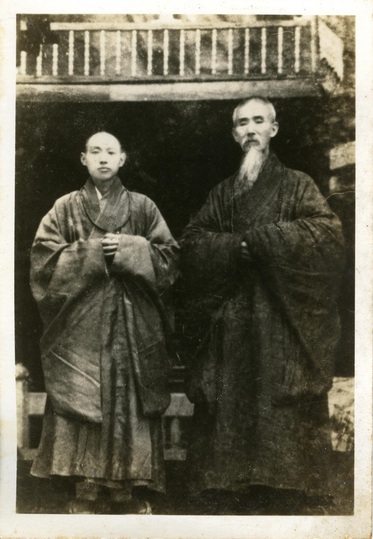 In the 31st year of the Republic of China (1942/43), Master Xu Yun was aged 103 years old.  This was a time of great disruption and destruction as Southern China resisted the imperial Japanese invasion.  The Japanese knew that many important Chinese officials met at the Nan Hua Temple (situated in Qujiang, Northern Guangdong) and sent bomber aircraft to destroy it.  Master Xu Yun (who was staying at Nan Hua) knew the intentions of the Japanese and when their aircraft arrived he told the occupants not to worry.  He sat in meditation in the main hall and the Japanese bombs that dropped but did not fall on the temple.  After this, the Japanese planes collided in mid-air and exploded.  Following this incident, Master Xu Yun travelled to Guilin (Guangxi province) at the request of Marshall Li Ji Shen where he stayed on Mount Yue Ya.  At this place many monks, nuns, laymen and laywomen came to be accepted as his disciples.  The above picture features Master Xu Yun stood next to Master Dao An (at Guilin) on the 14th day of the 11th month.  The accompanying Chinese text confirms these basic facts; 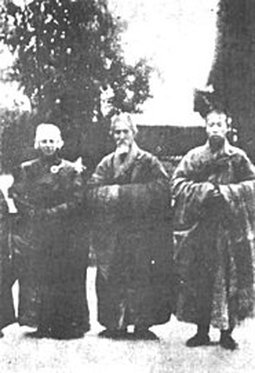 This picture appears throughout the Chinese language internet in a number of versions, usually with one or other of those represented (with Xu Yun) edited out for different reasons.  In this photograph, Master Xu Yun is in his 109th year of life and the year is 1948/49.  The person to the right of Xu Yun is the young Dharma Master Hsuan Hua – who would go one to be a famous Ch’an Master in the West – and to Xu Yun’s left is the American lady Ananda Jennings.  She had previously worked for three years at the League of Nations, but her experience suggested to her that true world peace could only be achieved within each individual.  She was once a Theosophist who had transitioned into Buddhism; she had heard that Xu Yun was a living saint and had travelled to China just to see him.  She received ordination under Xu Yun and this picture is believed to be taken at Nan Hua Temple, Guangdong province. 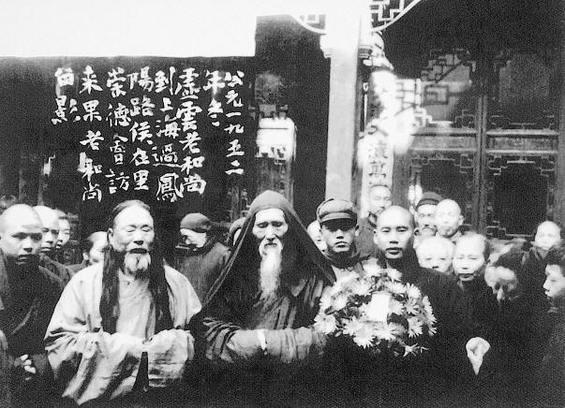 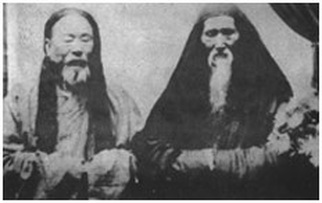 Master Xu Yun arrived in Shanghai on the 25th day of the 10th month of 1952, and the next day began a 7 week Prayer Meeting for World Peace. Master Xu Yun gave a number of discourses over those 7 weeks about the Ch'an tradition and remembered the great Pure Land Master Yin Guang (d. 1940).  In the above photograph he is standing with the Venerable Lai Guo (1881-1953) and the Chinese text written on the photograph reads:

‘In 1952, one day in the winter Venerable Xu Yun arrived in Shanghai and paid a visit to Venerable Lai Guo; this photograph was taken to commemorate this auspicious meeting.’

This picture often appears in Chinese sources in the edited format seen in the second version – with the other people and background airbrushed out.  Curiously the flowers remain.  In this picture Master Xu Yun is in his 113th year of life.
Page 1 2 3 4 5 6 7 ​8