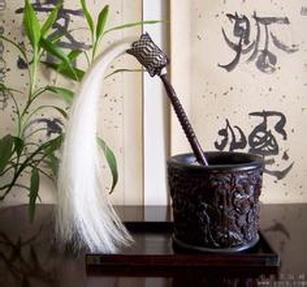 Later, he went to Chiang Ling for his ordination and spent the summer retreat studying the Vinaya Pitaka.  He then called on (Ch’an master) Yen T’ou.  (On seeing him) Yen T’ou held up his dust-whisk and Hui Chi spread out his cloth mat.  Yen T’ou hid his dust-whisk behind his back and Hui Chi picked up his mat, put it over his shoulder and went out.  Yen T’ou said, “I do not agree with your spreading the mat, I only agree with your taking it back.”

Generally speaking, a common Chinese language description of this devise is ‘马尾拂塵’ (Ma Wei Fu Chen), which literally translates as ‘horse tail whisk-dust’, but is more properly referred to in English transliteration as a ‘horse hair dust-whisk’, but is routinely rendered as ‘horse hair fly whisk’ in reference to its primary function of gently brushing away insects, although the word ‘fly’ does not appear in the original Chinese language title:

It can also be referred to as ‘whisk master’ (拂子 – Fu Zi), ‘stag tail’ (麈尾 – Zhu Wei), and ‘cloud unfolding’ (云展 – Yun Zhan), etc.  It is also carried by Daoists, and is used as a Wudang (internal) martial arts weapon.  The wooden handle is generally described as ‘long’ (probably at least two feet in length), and the tail can be made of animal hair, or strips of cotton, etc. In the Buddhist sutras, the Buddha, his elder disciples, and Bodhisattvas are often depicted as carrying the ‘white whisk’.  The Chinese Ch’an tradition continues this ancient Indian tradition, where the dust-whisk is carried only by a Buddhist master as a symbol of spiritual authority.  The ‘Upholder of Life’ (住持 – Zhu Chi), or ‘Head Monk’ (referred to as ‘Abbot’ in Western discourse), routinely carries the dust-whisk as a means to define his (or in the case of a nun – her) authority within the community.  If the Head Monk is indisposed or away, or if the post is vacant, then the temporary ‘Head Monk’ carries the dust-whisk.  He or she that carries this device is responsible for the spiritual and physical well-being of all members of the Buddhist community, be they ‘lay’ or ‘monastic’. Those who are qualified to hold the dust-whisk are enlightened beings (or their representatives) who have a solemn responsibility to the community which is dependent upon selfless service towards others.  Therefore, those who are not enlightened, and whose ego is still very much functioning in the deluded sense, dare not assume to be qualified to hold the dust-whisk, as such a deception leads to the generation of hellish karma for all concerned.  In common parlance the dust-whisk is known also as the ‘authority whisk’ (秉拂 – ‘Bing Fu’), and therefore those who possess it hold the power to wisely settle all arguments, and maintain peace and tranquillity in the community.  The origin of the dust-whisk appears to be from ancient India, as the Buddha stated in the Vinaya Discipline that ordained Buddhist monks could possess such an implement as a means to gently brush-away mosquitoes.  In the Buddha’s lifetime, this device was referred to as a ‘white whisk’ (白拂 – Bai Fu) – comprised of a ‘white’ yak-tail – but over-time this changed, and the sandalwood handle had also affixed to it different coloured buffalo, or horse-tail hair, that was used to ‘brush’ the insects away in a flexible manner, but which did not harm, hurt or kill the insects in any way.  (In modern times, synthetic fibres are often used in place of real animal hair). This was in accordance with the Buddha’s primary precept that Buddhists should not kill or cause to kill.  It is thought in legend that just as a herd of deer followed the direction of the yak-tail (to preserve their safety), those sages in China who possess the dust-whisk, leads all those who see it to temporal safety and spiritual enlightenment.