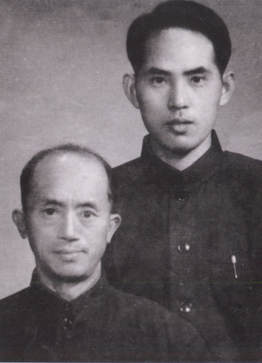 Master Hai Deng and his disciple – Master Ji Cheng (1968)
Translator’s Note: This is an English translation of the original Chinese text entitled ‘那年，在虛雲老和尚的見證下，海燈法師親傳溈仰宗十世法脈’. This can be translated as ‘In that Year, Witnessed by Master Xu Yun, Master Hai Deng Personally Transmitted the 10th Generation Wei-Yang Dharma Lineage’. Master Hai Deng (1902-1989) was a Ch’an Buddhist monk and expert practitioner of Shaolin Temple martial arts. He was also a disciple of Master Xu Yun (1840-1959). Although he became famous for his gongfu skills in the West (due to a documentary that featured his training), Master Hai Deng was not interested in fame of any kind. His gongfu training had its roots not in movement, but in ‘stillness’. He was a profoundly enlightened Ch’an practitioner who produced very able Ch’an disciples within his martial lineage. One such student is Master Ji Cheng who entered a Ch’an Temple at just 8 years old, before becoming a disciple of Master Hai Deng in June 1947. He listened well and trained diligently in Ch’an Buddhism and martial practice, and inherited the Wei-Yang Dharma from Master Hai Deng in 1957. This was agreed and over-seen by Master Xu Yun. Since that time, (Master Ji Cheng is now 85 as of May 2018), he is renowned in contemporary China as a great and modern Ch’an monk who has trained under some very famous and talented masters, whilst continuing to teach Ch’an and working to protect the environment. Thank you to Chen Gong (陈功) for translation clarification.
​ACW 29.5.2018 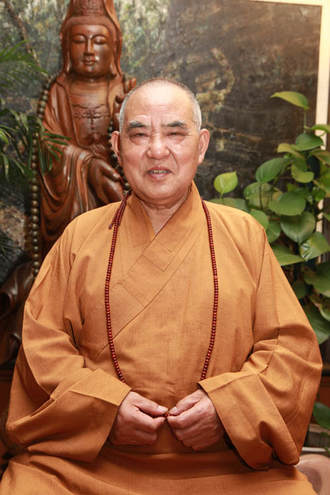 Great Master Ji Cheng (寂诚大师) b. 1932
This event took place on the 25th day of the 9th month, 1957, at the front gate of the Zhenru (真如) Ch’an Temple – on Yunju (雲居) Mountain – situated in Jiangxi province, southeast of the People’s Republic of China. On this day, the water of the Mingyue (明月) Lake was particularly still, clean and reflective, whilst there was a gentle breeze as the rising sun shone brightly its ten thousand rays across the sky. The air was sweet with the fragrance of blooming flowers and plants, and the lake looked as if it was full of liquid gold. Suddenly, the brilliance of the shining lake appeared to embrace and protect the Zhenru Ch’an Temple, its meditation hall and its disciples. 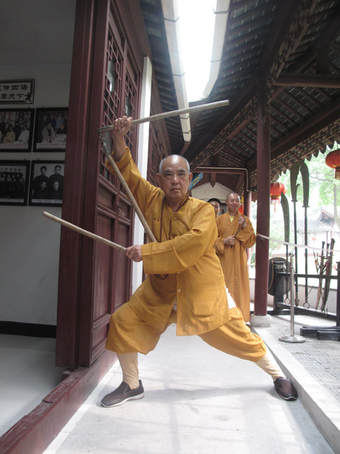 Great Master Ji Cheng at 80 Years Old
Early in the morning, the Old Master Xu Yun [虛雲] (who was 118 years old), left his cowshed. His thin figure walked gracefully in and out of the meditation hall, and all could see the sincerity and joy expressed in his calm facial expression. This old venerable monk had dedicated his life to rebuilding monasteries and teaching the true Ch’an Dharma, but on occasion, also had to meet the challenges of the mundane world. Although a day of happiness had arrived, the Ch’an monks held a sense of discipline, respect and solemnness.  They were careful not to express too much joy, which would be inappropriate for an old monk adhering to the Vinaya Discipline. The mind remained ‘non-attached’ as this ancient and important ceremony unfolded. As a consequence, the Head Monk (方丈 – Fang Zhang) – Master Hai Deng (海燈) – did not smile. This was the day he was to transmit the ‘Wei-Yang’ (溈仰) Ch’an lineage during a major ceremony. Master Xu Yun was the 8th generation inheritor of the Wei-Yang Ch’an lineage, and Master Hai Deng was the 9th generation inheritor of the Wei-Yang lineage. This is why Master Xu Yun was to witness the transmission of the 10th generation Wei-Yang Ch’an lineage by his disciple Master Hai Deng – to his disciple Yanqin (衍勤) – also known as the Ch’an monk as Ji Cheng (寂誠). 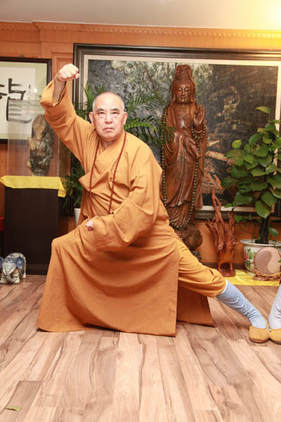 Great Master Ji Cheng has Strong Gongfu
The traditional story states that in ancient India, the Buddha was sat on Vulture Peak when he held-up a flower. No one understood except the disciple Mahakasyapa – who smiled. The Buddha confirmed the transmission ‘mind to mind’, and declared Mahakasyapa the 1st Ch’an Patriarch. Bodhidharma – the 28th Indian Ch’an Patriarch – brought the Ch’an Dharma to China. Bodhidharma was also the 1st Chinese Ch’an Patriarch and his teaching eventually reached the enlightened layman Hui Neng who was the 6th Chinese Ch’an Patriarch. After Hui Neng, the Ch’an transmission diversified into Five Houses. This is why the Ch’an lineage follows the tradition of ‘Patriarch to Patriarch transmits the Great Dharma – Master to Master is entrusted with the Profound Essence of the Mind’. The transmission of the Ch’an lineage is an event of great seriousness and is facilitated through a special ceremony designed to ‘seal’ the mind to mind communication. This was exactly what was happening at the Zhenru Ch’an Temple. In the Dharma Hall – with the pictures of the Buddhas and Ch’an Patriarchs hanging on the wall - the true Dharma eye was transmitted. Master Hai Deng was serious and disciplined as he performed the ceremony of transmission. On the transmission scroll, Ch’an Master Hai Deng skilfully wrote (with a gracious ease) the following words: 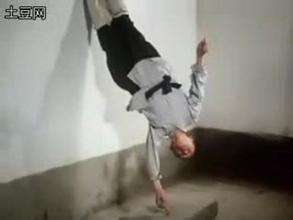 Master Hai Deng - Two-Finger Ch'an
「衍契太空絕纖塵，勤提一念蓋乾坤。
寂里認得安身法，誠到極處始通神」
‘Universal phenomena are like an obscuring dust that manifests within the ‘Grand Void’ (太空 – Tai Kong) - Gather all thoughts to a single point of concentration, to penetration this illusionary barrier, so that conscious awareness expands to embrace the divine sky and the broad earth. Retire to a quiet place to practice the peaceful body of the Dharma – Cultivate the utmost sincerity to realise the empty essence of reality by penetrating ‘Spirit’ (神 – Shen) with insight.'
Such was the deep and profound enlightenment of Ch’an Master Hai Deng, that the power of his realisation seemed to imbue every character that he wrote. He was sincere, and conveyed his best wishes, the greatest of good fortune, the best of luck, and the strength to uphold the Ch’an Dharma no matter what the situation or circumstances to his disciple – Master Ji Cheng. The scroll appeared to be soaked in Master Hai Deng’s good and virtuous intentions. A muffled sound became a sharp boom as the stamp came down, with the words ‘Yunju Mountain, Zhenru Ch’an Temple, Buddha, Dharma, Sangha Treasure’ embossed upon the seal. With great seriousness, Master Hai Deng also stamped the seals which read ‘True Dharma Eye Transmission’, ‘Authorised by the Wei-Yang 9th Generation Inheritor’ and ‘May the Monk Always Strive to Cultivate Virtue’, amongst other seals. When the ceremony was nearly completed and all the seals were in order, the Old Venerable Xu Yun was asked to add his seal of witness to the scroll. Master Ji Cheng vowed to preserve and maintain the true Ch’an Dharma, and continue the transmission to the best of his ability, as a representative of the Tathagata. Transmission connects all Ch’an practitioners, young and old, directly to the Buddha and the ceremony is a profoundly respectful affair. It is a time for happiness and discipline at the same time. This is how the ancient Buddha’s true Dharma is preserved and transmitted into the modern age. The mind and body was full of admiration, joy and hope for the future as the security of the Dharma was ensured. This is how Master Hai Deng correctly represented Master Xu Yun – and passed the Dharma onto Dharma Master Ji Cheng.