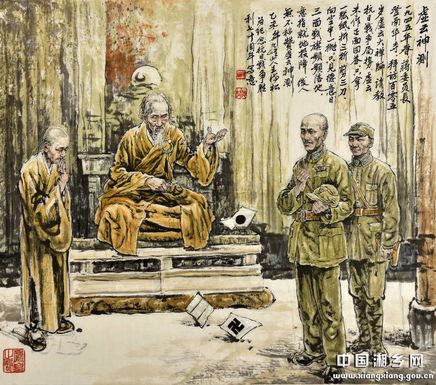 ‘In the first month, I performed rituals for the welfare of the country which ended on the twenty-sixth day. President Lin-shen, General Jiang Gai-shek, Minister Dai, General Ho and other high officials invited me, one after the other, to vegetarian meals. General Gai-shek enquired about the Dharma in detail, listening (to) the various points on materialism and idealism, as well as the doctrine of Christianity. I replied to his inquiry in a letter.’

Although this letter from Xu Yun to General Jiang Gai-shek (refuting the relevancy of Christianity for China), appears in the original Chinese language text of his biography – Charles Luk did not include it in his ‘Empty Cloud’ English translation, but it can be read here (in a ‘new’ translation):

Furthermore, the Chinese text accompanying this photograph tells a more complete story, which does not appear in Empty Cloud.  This is not unusual, as Empty Cloud is based on the earliest (and often incomplete) drafts of Xu Yun’s biography.  As time progressed, more and more stories and evidence came to light, and this information was integrated into later editions of Xu Yun’s biography. Although the above is an artist’s impression of the meeting, and not a photograph, it is included in this photographic library due to the extraordinary story it conveys.  The dates slightly vary, but again this is not unusual when translating traditional Chinese years into Western years, as there is not an exact correlation. In the spring of 1945, when Xu Yun was 105 years old, General Jiang Gai-shek visited the Nan Hua Temple to consult with the Venerable Ch’an Master Xu Yun. Whilst standing respectfully in front of the seated Xu Yun, General Jiang Gai-shek enquired about how the War of Resistance against the Japanese invaders was going in the area?  Master Xu Yun did not acknowledge the question, but remained silent. Instead, Xu Yun took a single sheet of paper and cut it with a knife into three equal parts, and threw the pieces up into the air.  As the three pieces of paper fell to the ground, each piece manifested a flag of the enemy Axis Countries – namely Nazi Germany, Fascist Italy and Imperial Japan – indicating that all three were either defeated or very close to defeat.  All those present praised the sage-like qualities of Master Xu Yun!

A special note from Mr Wang Ping:
An interesting 'sketch' of Master Xu Yun (1840-1959) has been added to the main ICBI site. The accompanying (translated) story does not appear in Xu Yun's biography - but is indicative of the many unusual happenings that Xu Yun experienced, or others experienced when in his company. The late Ch'an Master Jing Hui spent much of his lifetime gathering as many extra stories as he could find about Xu Yun - eventually creating a much expanded version of his biography in China (not yet available in English translation). Just what this story means is unclear, as the Chinese text gives the impression that three flags 'spontaneously' appeared on three pieces of paper - and that these manifestations were 'willed' by Xu Yun himself. As all genuine Ch'an practitioners do not fall into the trap of irrationality or illogicality, I doubt this 'literal' interpretation. I would suggest that this scenario is the 'impression' that a by-stander or a witness think they saw. Nevertheless, the symbolism this event holds is very important. Xu Yun kept aloof from the trivialities and delusions of the common world (and certainly had his differences with Chiang Kai-Shek), this is why he refused to 'acknowledge' the legitimacy of Chiang Kai-Shek's question regarding the extent of the local Chinese resistance to the Japanese invasion of China. It seems that Xu Yun threw the flags of the fascist countries to ground mimicking the act of throwing the legal documents of those sentenced to execution in ancient China (which were thrown to the ground in-front of the condemned - usually with their names 'crossed-out').
Many Blessings
Gratitude in the Dharma!