Page 1 2 3 4 5 6 7 8 9 ​10 ​11
ICBI LIBRARY NUMBER: 0081
Master Xu Yun Movie Book (50th Anniversary Edition). A video compilation - one of many examples - of 'still' photographs of Master Xu Yun extant on 'Baidu' the Chinese-language internet prevalent throughout Mainland China. As far as I am aware, Master Xu Yun was never filmed when he was alive, although a 'coloured' photograph was apparently taken of him during his visit to Guangzhou in 1947. 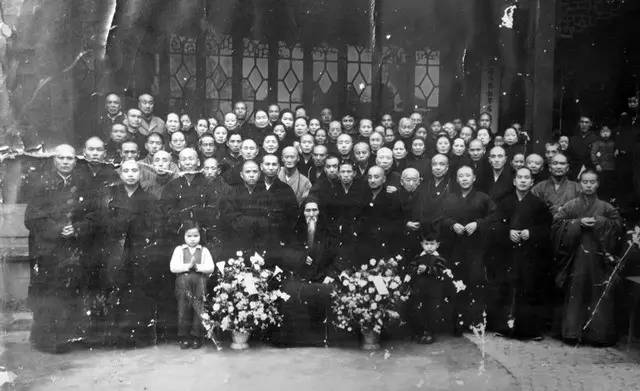 According to Master Cu Yun's Autobiography 'Empty Cloud' - this Discourse was Delivered on the 17.12.1952 in Shanghai
Master Xu Yun visited Shanghai many times, and when he did so in 1952, he was 113-years-old! He was invited to host a 49-day land and water purification ritual at the 'Jade Buddha' (玉佛 - Yu Fu) Ch'an Temple - during which thousands of people took refuge in the Buddha! Master Xu Yun, through his wise and compassionate nature, forged a very deep bond with the people of Shanghai! This particular photograph shows the 'Shanghai Buddhist Pure Karma (净业 - Jing Ye) Society' enthusiastically welcoming Master Xu Yun! 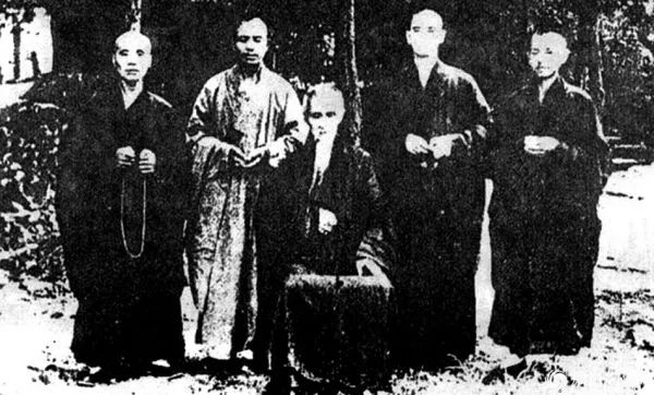 With Master Xu Yun Suffering from Illness in the Early 1950s - Many Photographs from this Time Depict Him Sitting Down.
This photograph is dated to the 7.8.1953 and features a sitting Master Xu Yun who is around 114-years-old! This group photograph was taken at the 'Great Forest' (大林 - Da Lin) Temple situated on Mount Lu (庐山 - Lu Shan) in Central China. Master Yancheng (演成) is first from right. Master Kuandu (宽度) is second from right. Master Wukue (无可) is first from left whilst Master Jiequan (戒全) is second from left. 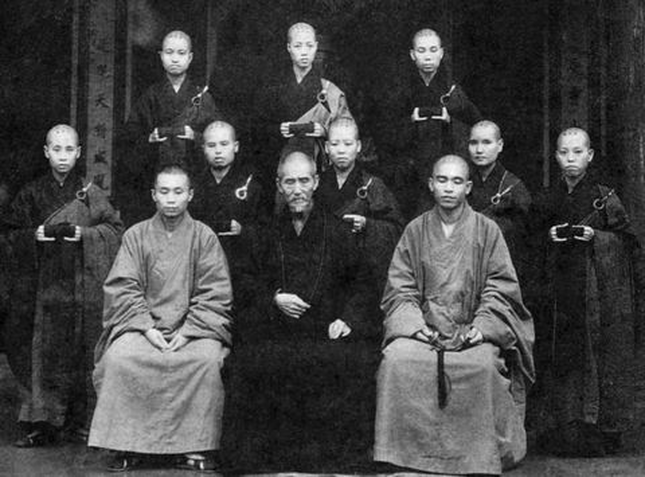 During his 108th year of age (c. 1947-1948), Master Xu Yun was photographed with his apprentices and disciples. Master Xu Yun transmitted the Vinaya Discipline Precepts during the Spring of 1946-1947 at the Yunmen Temple in Guangdong before travelling around the Guangzhou area visiting numerous temples and encouraging the practice of the Dharma. In the Winter of 1946 Master Xu Yun's Senior Disciple - Guan Ben - passed away. During the Spring of 1947-1948 transmitted the Vinaya Discipline Precepts - before leaving for a visit to the Chinese Buddhist community in the British Colony of Hong Kong. He then returned to Yunmen Temple to encourage the rebuilding. 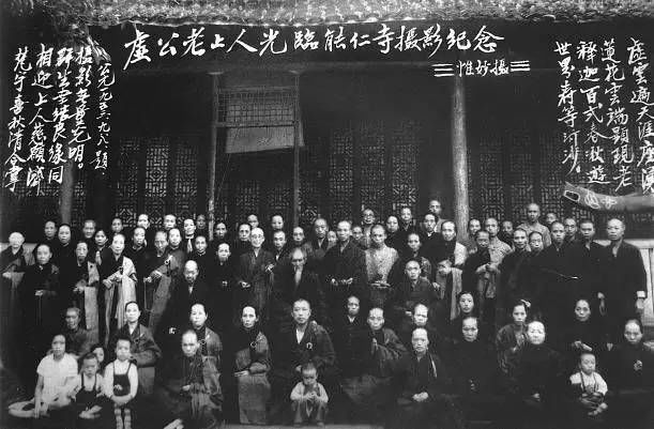 This photograph featuring Master Xu Yun was taken on the 8.9.1953. This is a group picture taken at the Nengren ('能仁)' or 'Cultivating Benevolence' Temple situated in the JiuJiang area of Central Guangdong province. Despite being around 113-years-old he was still able to travel widely and teach the Dharma. 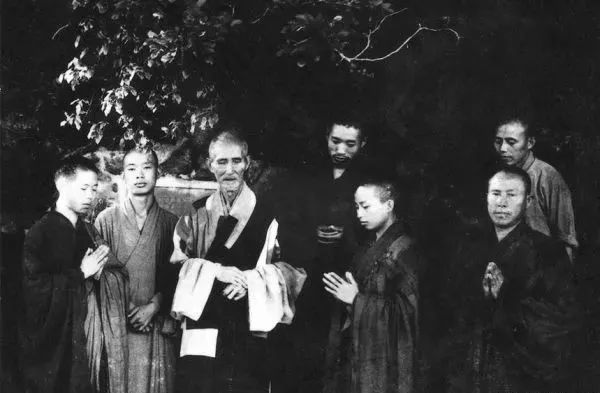 Ch'an originated in India and flourished in China. In order to promote traditional culture and improve spiritual self-cultivation and civilised living, the lay-people of Shanghai launched the "Hundred Years of Xu Yun" Picture Public Welfare Exhibition designed to cherish the memory of the Venerable Old Master, spread authentic Chinese Ch'an, and purify the hearts and minds of the everyone living within society. The picture was taken in 1957 on Yunju Mountain - when Master Xu Yun was already 118-years-old. Master Xu Yun is standing with Master Dazhong (大众) to his left - and Master Shaoyun (绍云)  to his right. 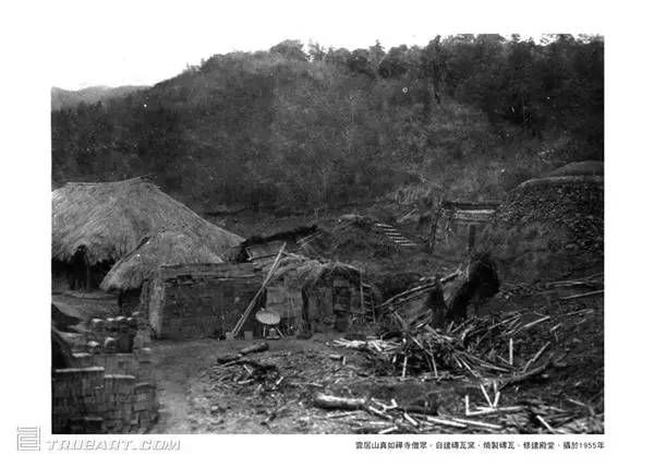 Master Xu Yun always led by example. Furthermore, he protected and upheld the principles of 'education' and 'protection' of the nation! He would never ask anyone to do anything he could not or would not do! Even when he was 116-years-old, he would walk out to the kilns and start the process of heating the ovens, making the bricks and 'cooking' the finished product! These bricks were then used to reconstruct the 'Zhenru' (真如) Ch'an Temple situated on Mount Yunju in Jiangxi province. This is a kiln on Mount Yunju designed and constructed by Master Xu Yun. 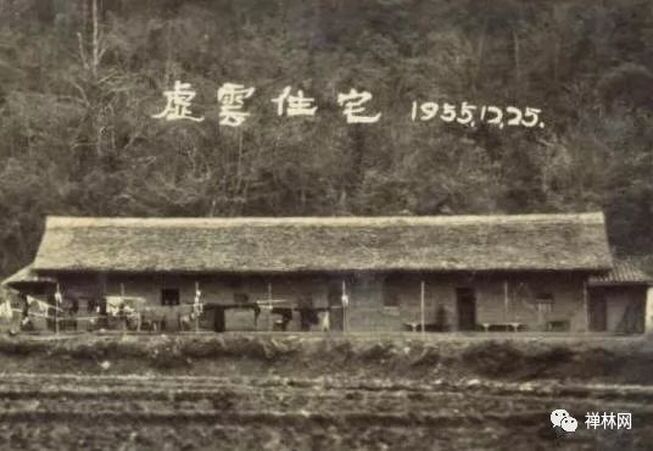 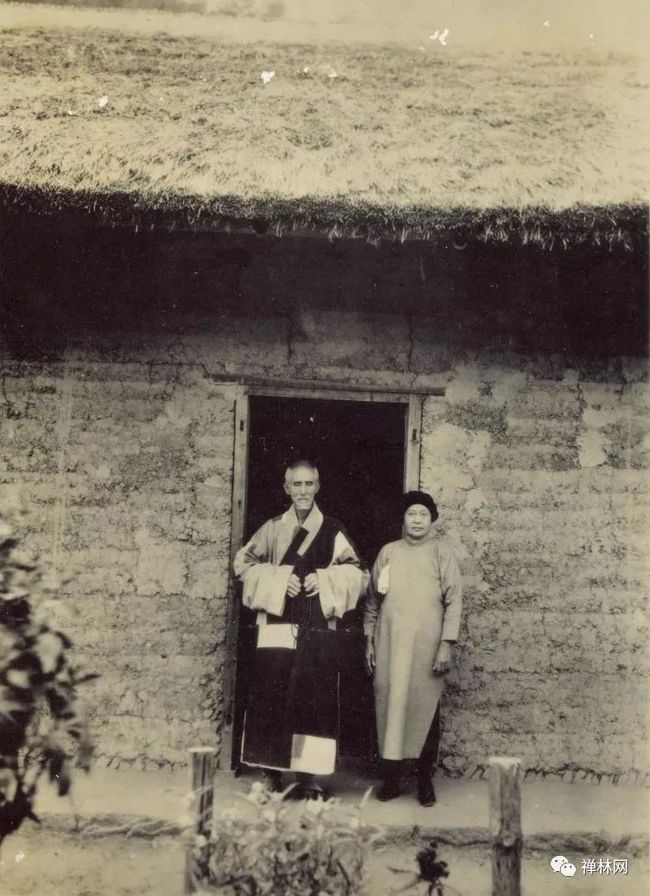 People Would Come from Miles Around to Stand with Master Xu Yun Outside his Cow-Shed! 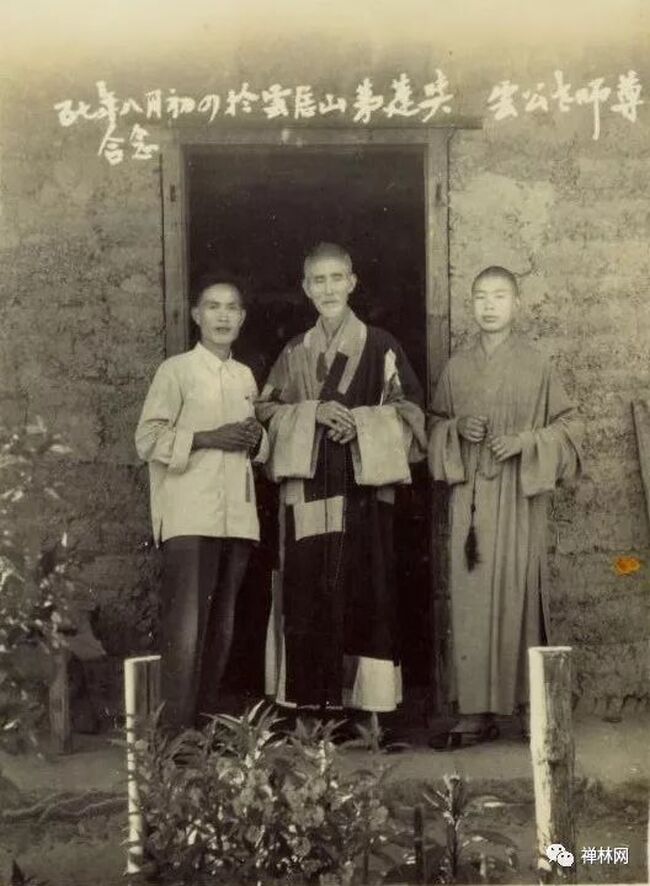 In the West this Photograph was Taken on Xmas Day 1955! 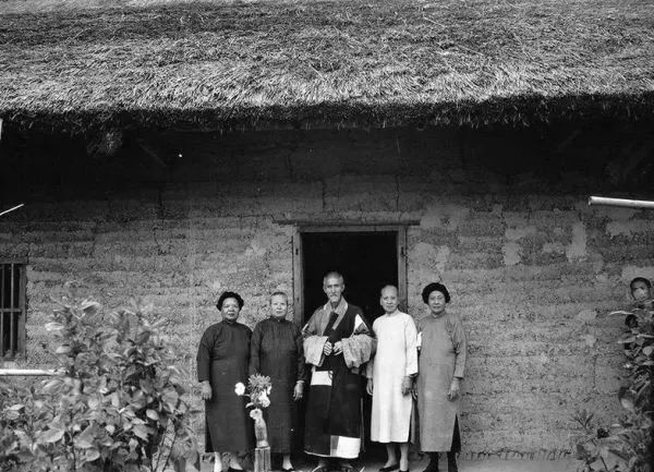 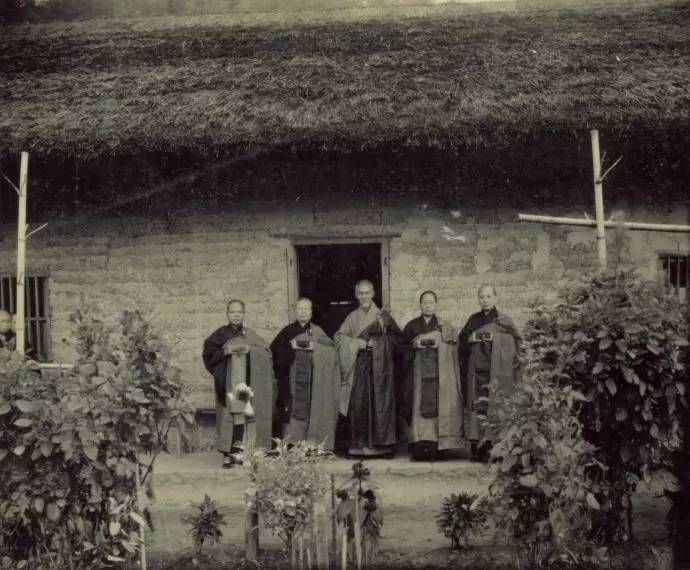 Master Xu Yun is Nearly 120-Years-Old!
Although the 'Head Monk' of the Zhenru (真如) Ch'an Temple situated upon Mount Yunju (云居) in Jiangxi province, Master Xu Yun refused to take-up residence in the purpose-built room reserved for one of such a status. Nevertheless, such a room was a fairly simple and austere affair allowing the designated 'Head Monk' a private space for meditation and Sutra-study, as well as the inevitable paper-work that developed from such a position. Not so well-known is the fact that Master Xu Yun maintained the Ch'an Letter Writing Tradition which he emphasised as a means to help ordinary people in their Ch'an mind (and body) development from 'afar' to to wherever they happened to live. China's postal service was thousands of years old by this time and very well-established. Chinese postmen and women were used to finding hermits and recluses living within, around and atop the remote areas of China! Many of Xu Yun's monastic disciples started communicating with Xu Yun through the written-word when still children. However, out of a sense of humility, Master Xu Yun would choose instead to live in an old 'cow-shed' situated on the temple-grounds. This is referred as a 'thatched' hut (茅蓬 - Mao Peng) within many Chinese texts and is featured in these two photographs - considered by many as a 'talisman' of very special physical significance and spiritual power. Indeed, during 1990, the Venerable Old Monk 'Yi Cheng' (一诚) (and former disciple of Master Xu Yun) sponsored the old 'cow-shed'  being converted into the 'Xu Yun Memorial Hall' (虚云纪念堂 - Xu Yun Ji Nian Tang) 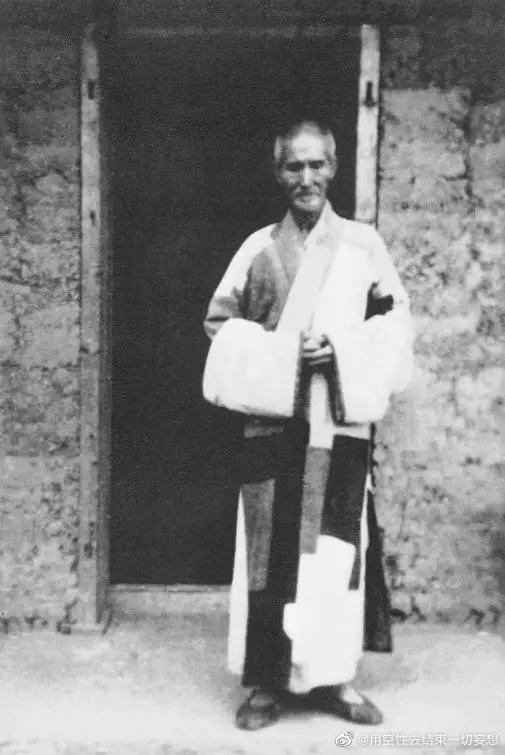 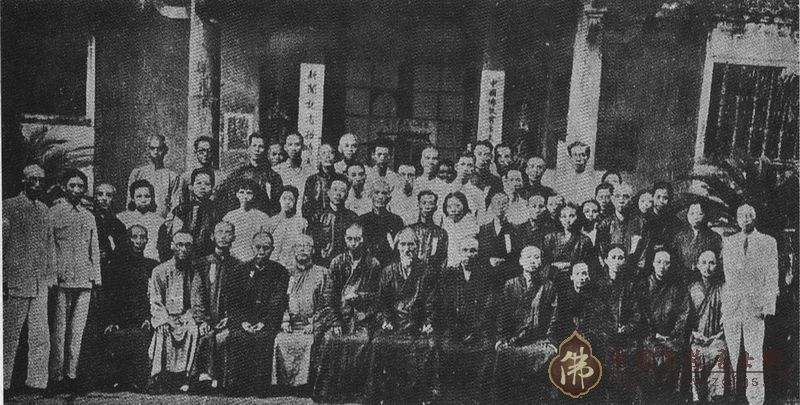 During October 1952, Master Xu Yun visited the 'Guangji' (广济) Temple in Beijing - where he sat for a photograph with international Buddhist friends! This was Master Xu Yun's 133th year of life and his autobiography suggests that he left Wuchang on the 28th day of the seventh month and resumed his journey North to Beijing at the behest of the government. He originally stayed at Guanghua Temple when arriving in Beijing - but so many people turned-up to show their respect that he had to relocate to the Guangji Temple. Master Xu Yun would go on to re-establish the Chinese Buddhist Association! 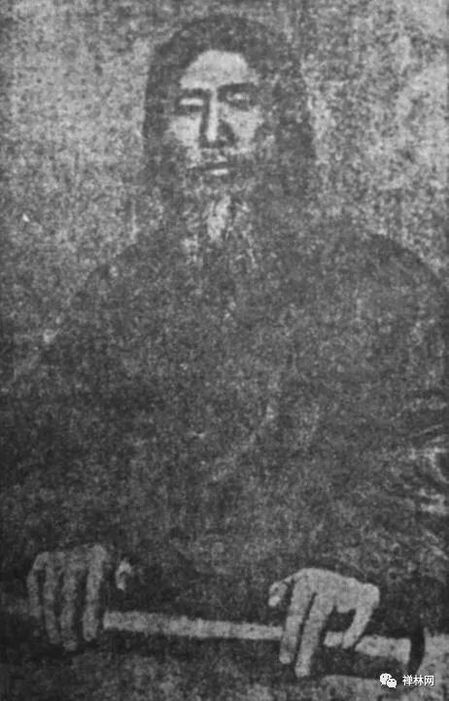 The Venerable  old Monk Xu Yun sits in meditation with his eyes open, featured in the second edition of "Jue You Qing Bimonthly" (Enlightened Wisdom Generates Compassionate Action) No. 159-160 combined issue published on April 1st, 1946. Master Xu Yun was around 106-years-old when his photograph was published, however, when it was actually taken is another matter. His haitsyle looks similar to a 1926 picture taken at the Yunqi Temple.  Master Xu Yun is already missing the ring-finger from his left-hand. In his 58th year of life (1897/98),  Master Xu Yun travelled to the Ashoka Monastery situated in Zhejiang province, with the intention of burning-off his left ring-finger out of respect for his mother who died giving birth to him.